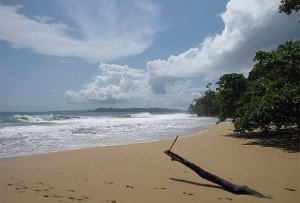 (Vancouver Sun) I don’t know how they do it, but young backpackers are the first to find out about these places. Before the luxury hotels spring up and cruise ships sail in, they are there.

The little funky town of Bocas del Toro in Panama was full of them. I don’t think they are called hippies these days, but they do remind me of the ’60s. I like to think of myself as having been a hippie.

My husband Dan and I were taking a three-week vacation in Panama. Before my research on the Internet, the only things I had known about Panama was that it was famous for its canal, it was in the same time zone as Ottawa, and it was warm.

I read that Bocas del Toro, on the island of Colón, had retained its original charm in spite of becoming a popular destination. Our kind of place: a small town with a laidback Caribbean vibe set in an archipelago of idyllic beauty, a place where we could just be easy, soak up some sun and eat catchof-the-day with perhaps a piña colada or margarita. We booked eight days at a hotel on the main street.

Bocas lived up to its reputation and made me smile as I felt transported back in time.

This colourful town seems to have as many hostels as hotels. Hostels such as the Gran Kahuna and Calypso stand on the main street alongside little shops with multicoloured woven hammocks, amateurish paintings and an assortment of earrings and bracelets. Brightly painted wooden buildings house restaurants with eating areas on stilts over the ocean. Water taxis outnumber land taxis by 10 to one.

My husband and I had backpacked through Europe in our younger days. This time we had small rolling suitcases and opted to stay in a comfortable hotel and eat at good restaurants most of the time.

We would rise early in the morning and, as the sign in one of the restaurants said, it was “Just another day in paradise.”

Cool dude Roderick served us breakfast at the outdoor patio at Palma Royale, then we would walk down the street to the water-taxi stands. We could choose a day package or we go to Red Frog Beach on the island of Bastimentos -a favourite outing for sure, $5 each would take us on the 10-minute water taxi ride and $3 paid for the park entrance. That included the short ride in the back of a pickup truck to the white-sand beach. But first we would look for the resident three-toed sloths in the trees near the entrance. They are so slowmoving, it was hard to spot the hairy creatures.

Apparently an abundance of tiny red frogs, not much bigger than your thumbnail, live in the vegetation at Red Frog Beach. So why couldn’t I find one? Not to worry, there were always two or three children from the nearby village carrying frogs wrapped in banana leaves ready for photos, for a small price.

I admired their entrepreneurship, but I didn’t think it was healthy for the creatures so I said no, but asked them to show me one in the wild. A couple minutes later, I had my treasured photos and a little boy had his dollar.

Our favourite daytrip was with Jampan Eco-Adventure Tours. It started with Dolphin Bay, which was disappointing -too many boats, not enough dolphins. But the rest of the day was interesting and fun. We visited the indigenous Ngobe community at the beautiful, tropical San Cristobal Island. Then off to lunch, a delicious pizza baked in a wood-fired clay oven in a small outdoor restaurant. A German couple had cleared the spot in the jungle on the mainland coast and built the restaurant.

Evenings were laid-back. First, a cool drink during happy hour at one of the many restaurants or bars on the ocean side. We’d sit at the back, facing the water and watch the small boats coming and going. Then dinner. Our favourite place was Lemon Grass. Up the purple staircase to the second floor where the view was as superb as the menu. The lobster tail for $17 was big and delicious.

Judy Slack and her husband, of Osgoode, went to Panama in February. They fell in love with the Bocas del Toro region.

Where: The archipelago of Bocas del Toro is about 35 kilometres from Costa Rica on the Caribbean side. The town of the same name is on the island of Colón.

Getting there: Fly to Panama City from Montreal or Toronto. Daily flights to Bocas depart from the domestic airport in Panama City (about $180 round trip).

Cost: Prices range from a hostel bed for $10 daily to more than $200 for a luxury hotel suite with a balcony facing the ocean.

Go in the dry season, between January and April.

Pack light. There are weight restrictions on internal flights.

U.S. dollars are the legal currency.