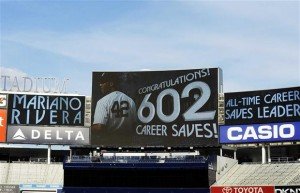 Rivera got Trevor Plouffe to ground out to second, Michael Cuddyer to fly out to right and then struck out Chris Parmelee, caught looking on his signature cutter, to preserve New York’s 6-4 win for his 43rd save of the season.

“I couldn’t even dream about this,” Rivera said during an on-field interview while even the Twins players looked on from their dugout. “From what it was back home in Panama to now it’s a tremendous journey.

”All I can say is thank God for my team mates, they give me the opportunity.“

Rivera’s team mates ran out of the dugout to congratulate him and later his longtime catcher Jorge Posada and slugger Alex Rodriguez pushed him out to the mound at Yankee Stadium to stand alone and acknowledge the cheers of the fans.

The 41-year-old Rivera surpassed former San Diego Padres closer Trevor Hoffman, who became the saves leader in September 2006 when he recorded his 479th save to pass Lee Smith. Hoffman would register another 122 saves before retiring last offseason with 601 career saves.

”I want to congratulate Mariano Rivera on setting the all-time saves record. It’s a great accomplishment and he is still going strong,“ Hoffman said in a statement.

”I have tremendous respect for Mariano not just for his on-field accomplishments, but also for his service to the community.“

Rivera’s milestone save came in a make-up game against the Twins, who made a special one-day trip to New York to play a contest that was rained out in April.

As it got closer to Mariano time, fans were cheering outs made by the home team in hopes they would not increase the lead past three runs thereby denying Rivera a save opportunity.

”I don’t think I’d ever hear the day when people would cheer for us to make outs,“ noted Yankees manager Joe Girardi. ”But obviously the people who came to the game today – it wasn’t a scheduled game – they got a treat.“

Rivera, who took over the closer’s job from John Wetteland in 1997, was caught in his first seasons in New York by manager Girardi, who said being around Rivera all these years was something special.

”It’s an honor, to have the privilege to catch him and to coach him and to manage him,“ said Girardi. ”It has really been a lot of fun for me and enjoyable, and it’s also been very peaceful. When Mo comes in a game there is such a great feeling about that.“

The slender Panamanian with the deceptively quick fastball, diabolically late-breaking cutter and pinpoint control has been the most efficient closer over his long career.

In addition to his regular season exploits, Rivera has been superlative in the postseason, registering 42 career saves, which do not count toward the saves record, on his way to collecting five World Series rings.

”To see the level that he’s done it at, whether it’s been in the American League East, or in the playoffs or in the World Series and to see how humble the guy is,“ added Girardi about his closer, who he believes may never be overtaken. ”I’ll be shocked if it happens in our lifetime.“