(Lost Paradise of Panama) Castillo de San Lorenzo, or Fort San Lorenzo, is one of those great places to visit that’s not too far off the beaten path. It’s located on the other side of the massive Gatun Locks near a former Canal Zone fort now known simply as Sherman. Many US servicemen are familiar with the Jungle Operations Training Center that was located here for decades. Although there’s a fairly decent road that goes all the way to the national monument, because of its location, not as many people venture this way. Most tend to go toPortobello near Colon. 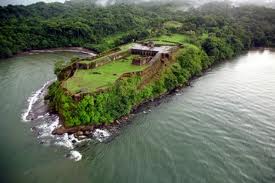 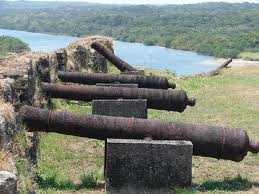 You can make a day trip out of it if you are staying in Panama City. Just be sure to leave early enough to drive to the Atlantic side. And also build in time if the locks are being used. You might have to wait for the swing bridge which is only open if there is no vessel traffic. The other option would be to stay at a hotel at the former Fort Davis or Fort Gulick. Hotel Melia would be a good option. You might want to get directions to San Lorenzo before heading to Sherman, although the site is not hard to find and only a few kilometers away. At the end of the road you will come out into a clearing at a point where the Chagres River and the Caribbean meet.

Once you stand on the fort’s wall and gaze down over the Caribbean and the mighty Chagres, it’s easy to see why the Spanish built a garrison here. The surroundings that you will see look very much the same as they did when Columbus first visited the area in 1502. San Lorenzo itself wasn’t completed until the late 1500’s. In 1671 the privateer Henry Morgan captured the fort before marching across the isthmus and sacking Panama Viejo. He later had it destroyed, only to be rebuilt and refortified by the Spanish once again. It doesn’t take too much imagination as you walk among these old ruins to feel what life must have been like here so many centuries ago.