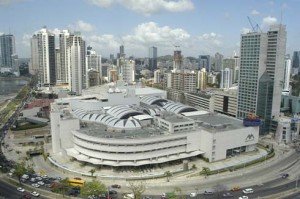 (Panama Gringo) Panama City is, in my opinion, a shopper’s paradise. There are four main malls in Panama City and each seems to draw tourists and locals inside and out of the heat by the hundreds. While I recommend shopping on the streets such as on Via Espana in El Congrejo the malls are a great way to spend the afternoon in air conditioning, grab a bite to eat and get some retail therapy.

The busiest mall in Panama is probably Albrook Mall near the Albrook air force base. The mall also houses the Albrook bus terminal likely helping keep it jam packed. Albrook offers some of the best prices in several discount stores such as Conway, Titan and El Costo making it a great place to shop for furnishings and décor on a budget.

Los Pueblos Mall is most likely the least crowded mall in Panama. It has a ton of specialty stores and boutiques which I really liked. If you’re shoes shopping (shoes seem to be a much bigger deal in Panama as opposed to the states) I’d definitely suggest hitting up Los Pueblos for a great variety and selection of shoes.

The most upscale and probably the nicest mall in Panama City is Multiplaza located across from the John Hopkins Hospital in Punta Pacifica. Multiplaza has a really nice Riba Smith Grocery store inside as well as a Home Depot, Sanbornes department store, Calvin Klein, Lacoste, Nike, MNG (Mango), an Apple Store and countless other clothing shops and boutiques. Multiplaza is where mostly the upper class and teenage population of Panama City shop, dine and hang out.

My favorite mall in Panama, MultiCentro, is located in the Obarrio district of Panama between Punta Pacifica and El Cangrejo. Multicentro has a small but substantial food court on the third floor, but the Hard Rock Café and El Amir (a Lebanese spot) are located in the mall also. The Majestic Casino is connected to the mall as well as the Raddison which has a five start sushi restaurant upstairs. Of all the malls in Panama I prefer Multicentro’s versatility. Their stores range from bargain such as La Onda to higher end shops like DEISEL. Multicentro is kid friendly with arcades and plenty of kid related stores. However, it has enough to entertain adults for hours as well.

For a review of Panama’s grocery stores, check out this post.