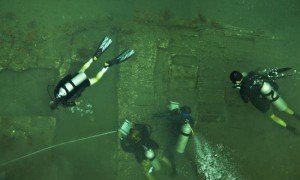 (Our Amazing Planet) Divers have found part of a shipwreck that could possibly belong to one of Captain Morgan’s lost ships.

As the story goes, Sir Henry Morgan and his fleet, believed to number five ships carrying 470 men, set out to take over a fort guarding the entrance to Panama City, Panama. Morgan was sailing on the Satisfaction, his flagship, but all of his ships crashed on the Lajas Reef in shallow water. Despite losing their ships, Morgan’s men still were able to paddle ashore and capture the fort. [Images: The Search for Captain Morgan’s Lost Fleet]

This week, a dive team surveyed the seafloor near Panama City from above water and found several sites they suspected had buried historical treasure. But they had money and time for only one dive, said Frederick Hanselmann, a marine archeologist at Texas State University in San Marcos.Lucky for them, the first time was a charm.

The divers found a 52-foot-long (15.8 meters) by 22-foot-wide (6.7 m) chunk of a ship’s wooden hull. The ship’s name isn’t on the hull, but the archeologists gathered clues about the hull and are building their case that it was once part of the legendary pirate’s fleet.

“You just try to fit the pieces of the puzzle together as best you can,” Hanselmann told OurAmazingPlanet.

The hull appears to have been built in the 17th century, when Morgan would have been sailing. It was found near the recent discovery of cannons believed from Captain Morgan’s ships. The dive team also found chests filled with unknown booty, potentially artifacts that will help identify the ship as one of Morgan’s.

“There’s more analysis to be done to positively confirm it,” Hanselmann said. “With this wreck we’ve barely scratched the surface.”

The wreckage was found buried in sediment, under 31 feet (9.4 m) of water. The divers spent up to two hours at a time underwater, breathing air supplied by a research vessel. They lightly excavated the site, drew maps of the wreck and took plenty of pictures. When they finished, the team covered the site back up to protect the ecosystem that has bloomed around the ship.

The coral-covered wreckage will remain on the seafloor, where it is protected by laws against looting. The archaeologists will continue to analyze the wreckage gathered for other clues about life on the seas — and underwater.

“Shipwrecks are often described as a time capsule with a snapshot view of how life was lived at sea and how maritime cultures interacted,” said study team member Bert Ho of the National Parks Service.

The team is raising money so they can conduct more dives at other nearby sites.