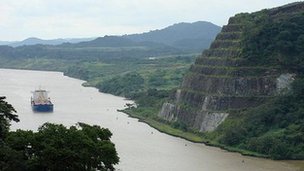 Traffic through the Panama Canal – which connects the Pacific and Atlantic oceans – has been temporarily suspended because of heavy rain.

The canal authority said the rains had pushed water levels in lakes that form part of the canal to historic highs, potentially endangering shipping.

It is the first time the canal has had to close since the US invasion of Panama in 1989.

Officials said they hoped normal traffic could resume “within hours”.

The last ship to pass through before the canal was closed left at midday, and some vessels were left idle in the waterway.

The canal authority said it was opening flood gates to reduce the water level in one of the lakes.

Around 14,000 ships pass through the Panama Canal each year, representing about 5% of world trade.

Passage through sections of the waterway have been suspended in recent years because of accidents, but not operations along its entire length.

Much of Central America as well as Colombia and Venezuela in South America have been experiencing its heaviest May-December rainy season in decades.

Linking the Atlantic and Pacific Oceans across the narrow isthmus connecting Central and South America, the Panama Canal is a vital artery of world trade and the cornerstone of Panama’s economy.

The waterway is currently undergoing a multi-billion dollar expansion project that will increase its capacity and allow navigation by ships that are currently too big to use it.

Unlike the Suez Canal, the Panama Canal is not at sea level.

Instead, ships are raised and lowered by massive locks at either end, and pass through a freshwater channel fed by rivers that run off the surrounding forest-covered hills.