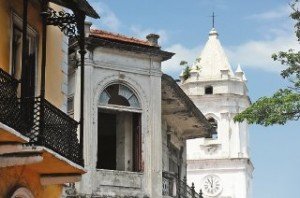 (Prensa.com) The agency informed the Government to build a tunnel or viaduct, the Old Town would lose its World Heritage status.

If the government built the third stage of the coastal strip, the United Nations Educational, Scientific and Cultural Organization (Unesco) remove from its list of historical heritage of humanity to the Old Town in San Felipe.

Panama Unesco recommended in a report, stop “immediately” the third phase of the coastal strip that aims to interconnect with the Balboa Avenue of the Poets by a tunnel or a bypass.

According to the document, to be published in June by the international organization, a bypass to the San Felipe Marina amend the Old Town waterfront, and a tunnel could mean physical risks to the very old and dilapidated structures Heritage.

The Panamanian Foreign Ministry have informed that the document, and discuss how authorities react to call for attention. Meanwhile, spokesman of the Ministry of Public Works, Fernando Kant, said the design of the project has not been defined yet.

Heritage’s director, Sandra Cerrud, hereby acknowledged receiving the comments of Unesco, and in June added to sustain the viability of the third phase of the coastal strip in the World Heritage Convention to be held in Paris, France .