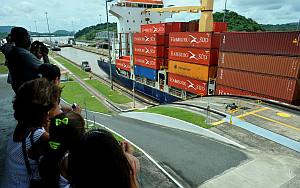 (Penn Live) One of the true engineering marvels in the world, the Panama Canal, is definitely a must-do travel experience.

Since 1914, this link between the Atlantic and the Pacific continues to be one of the world’s greatest and most important shipping routes. More than one million ships, from all over the world, have transited the canal. The historic millionth mark happened September 4, 2010 with the transit of the freighter “Fortune Plum.” Beginning in 2016, the capacity of the Canal is scheduled to be doubled.

If you think it’s a cruise experience only an engineer will enjoy, think again. A Panama Canal cruise is very appealing to a wide variety of travelers. I’ve cruised the Canal three times and would do it again in a heartbeat. It is like a real life jungle cruise – with all the comforts and amenities you desire. Watching the massive ships getting raised and lowered through the locks is a new and thrilling experience for many people. It is a fascinating and historical cruising event that I highly recommend.

Many cruise lines (in all sizes and categories) offer Panama Canal sailings each season (typically October to April) with either the traditional trans-canal all day, ocean-to-ocean crossing, or a partial crossing in which the ship passes through one lock and turns around in Gatun Lake.

In addition to the obvious canal viewing (best views are on the ship’s bow), the Panama Canal is a fantastic cruise itinerary for travelers wanting more relaxing and leisurely days at sea – especially during the full transit.

You’ll have lots of warm and sunny days, with plenty of deck chairs and outdoor space to enjoy, as there are fewer families and children onboard.

The history of the canal is interesting and complex, and I feel that attending the lecture series onboard your ship is crucial to enjoying (and understanding) the entire passage experience.

Panama Canal cruises mostly begin in Ft. Lauderdale or Miami, Florida and include ports-of-call in the Western and Southern Caribbean, central America and along the western coast of Mexico before ending in Los Angeles, San Diego or San Francisco. The Panama Canal has also become a very popular repositioning cruise between Alaska, the Caribbean and South America with longer cruises and often at terrific values.

Tips to get the most from your Panama Canal cruise :

Prepare to do some reading. Read “The Path Between the Seas” by historian David McCullough – either before or during your cruise.

Time your trip. Although the season is October to April, the best time to go is after the rainy season ends in November. I’ve done it in Feb., March and April and not had one rainy day.

Pack and dress for the tropics. Put your sunscreen on, wear a hat and be prepared for the hot Panama sun.

On the day of the transit, wake up early. Prime viewing locations fill up quickly, although the ship is prepared to open up “crew only” areas so everyone has a good seat.

Forget the diet. Enjoy the Panama rolls (delicious sweet fruit pastries) that are baked all night long and served before and during the transit to all the early-birds on deck.

Book your shore excursions (tours) early, especially the aerial tramway in Puerto Limon, Costa Rica. You’ll find yourself way above the trees taking in all the spectacular flora and fauna scenery and exotic birds and animals in the Braulio Carillo National Park.