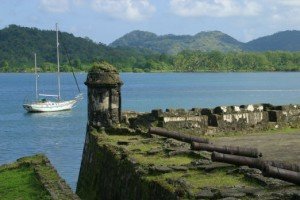 (Newsroom Panama) Panama’s long neglected historic site, the  San Lorenzo, fort in  Portobelo, has gained a breathing space to save its designation as a World Heritage site and will retain its status at least for another year.

UNESCO’s World Heritage Committee of UNESCO decided in Paris on Thursday, June 23 not to include the monument in the list of World Heritage  sites in Danger after receiving  promises from  the Panamanian delegation that a plan to preserve its historical value will be presented.

The majority of the 21 countries that form the Committee acknowledged that the site is in danger, but agreed to let Panama off the hook, pending implementation of the plan.

Debate over the listing of Casco Viejo’s listing continues. Residents of the old city have been concerned after reports of a march of Chorillo residents, organized by the local mayor,  to tear down flags “of the rich” opposing the building of the third phase of the Cinta Costera around the World Heritage site, with UNESCO threatening to remove its designation.