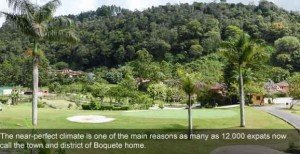 (International Living) The first time I saw Chiriquí Province I was enchanted. My husband Al and I had rented a car to tour Panama in our quest for a new place to live. Having traveled throughout Central America, Panama was our pick due to its warm climate, low cost of living, developed infrastructure, and economic and political stability. We came back to stay in 2009, made our home in Chiriquí, and I’m still awed by the stunning scenery.

Chiriquí is one of nine provinces in Panama and it borders Costa Rica to the west. Mostly rural, the landscape is among the most scenic in the country, with mountains defining the skyline.

Acres of fruits and vegetables thrive in the rich volcanic soil, while cattle and horses laze in verdant pastures. The capital city of David is a bustling commercial hub undergoing a serious growth spurt.

A tour of Chiriquí Province will take you from Panama’s highest point, 11,440 feet at the peak of Baru Volcano, to sea level and sandy beaches along the Gulf of Chiriquí. You’ll find 20,000-plus expats living throughout the province. Whether you prefer the beach or the mountains, living in town or out in the country, bright sunshine or cool cloud cover, Chiriquí offers you a choice…

The near-perfect climate is one of the main reasons as many as 12,000 expats now call the town and district of Boquete home. Its elevation of 3,940 feet on the eastern slope of Baru Volcano means normally cool temperatures around 80 F in the daytime and 60 F at night, with frequent misty rain called bajareque. The village sits in a bowl-like depression, split by the rushing Caldera River. The surrounding hillsides are dotted with homes.

Boquete is known for its natural beauty and has an unexpected alpine quality. Also tucked into the hillsides among the exotic flowering plants are coffee plantations and orange groves. The village itself is quite small with a central park surrounded by stores and services to meet basic needs. Since it is a tourist destination there are plenty of hotels, B&Bs, hostels, and spas, along with a wide range of restaurant options, from local fare to gourmet meals…

On the western slope of Baru Volcano the towns of Volcan and Cerro Punta are famous for producing much of Panama’s food. Volcan shares the fresh highland climate of Boquete, and Cerro Punta is even cooler and wetter, at an elevation of 6,562 feet. I never get tired of the drive to Volcan. The highway that winds uphill is lined with dairy farms, plant nurseries, poultry barns and spectacular vistas across the landscape.

The town is in open country, spreading out toward the looming volcano in one direction, and the border with Costa Rica in the other. Beyond town the road climbs upward, past horse stables and mountain streams, to the village of Cerro Punta. Along the way vendors sell bags of their fresh produce and the local favorite, fresh strawberries with cream.

Between the highlands surrounding the volcano and the lowlands along the coast lies a region I’m calling the midlands. This largely undeveloped and overlooked area stretches from west to east in the foothills below the volcano and consists of numerous small towns with a far-flung expat population. With a climate warmer and drier than the highlands and cooler and fresher than the lowlands, for some this is the perfect location.

“We have the best of Chiriquí here,” says Jerry Knezic, who rents a townhouse in Boquete Canyon Village near Caldera. “Our view is awesome, it is so private and quiet here, and we can get to Boquete or David in about half an hour. We have great neighbors and lots of parties. What more would you want?”

Chiriquí Province opens onto the Pacific Ocean. This coast is known for its fantastic offshore fishing, with tuna, marlin, mahi-mahi, sea bass, snapper and more running in the local waters. The water is always warm so you can swim year-round.

Numerous small islands and coral reefs are included in the Gulf of Chiriquí National Marine Park, most of them easily reached from Boca Chica where boats are for hire. Somewhat surprisingly, the coastline here is undeveloped. You won’t see any high-rises, condo developments, theme parks or water sports vendors. You will see a sandy beach with a wide tidal range, typically small waves and very few people.