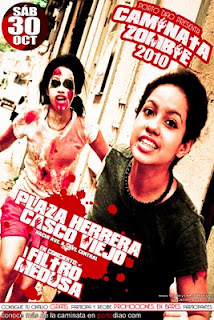 Creative collective Porto Diao starts off the fifth year of their famous Panama Zombie Walk, celebrated every Halloween night, in a new venue with new surprises thrown into the mix. Moving out of the Calle Uruguay party district, the zombie horde will take up residence in the historic Old Quarter to create the biggest Halloween event ever this coming Saturday, October 30th starting at 7pm.

The “Zombie Walk” consists of a pilgrimage, as its name implies; the M.O. changes when participants are asked to dress up for the occasion, preferably as an undead or “zombie,” walking and acting like such. The “humans” and other sorts of traffic along their path will be met with a good scare from the zombie walkers, who take it very seriously.

Throughout the years and since its humble beginnings in 2006 when approximately 35 showed up to participate, the “zombie horde” has grown exponentially with people of all ages, beliefs, races, shapes, sizes, and social classes participating to see Halloween in an entirely different light. For last year’s Walk there was a tally of nearly 800 people, with many more adding themselves to the event as they walked, and it’s expected that this number increases exponentially with the change of location.

This year, the Zombie Walk starts at Plaza Herrera in Casco Viejo, with the community and businesses’ kind blessings. Security and active participation from the community guarantees a safe family environment. Signing up to the Walk is free, with a bracelet that will grant you special promotions in several of Casco’s (and beyond!) bars and restaurants, for all ages.

After the sign-up period, the Zombie Walk begins all along Avenida A, the Old Quarter’s main road passing though some of the best bars, restaurants and cultural center in Panama City such as Moitos Sin Mojitos, Super Gourmet, Diablo Rosso, Platea, La Casona and more. The zombie horde will pass through the main plazas of this World Heritage Site, such as Plaza Bolivar and Plaza Catedral.

Along the route, the horde can expect resistance by part of various factions both for and against the zombie plague, priests trying to “exorcise” them, fireworks, fire breathers, monster hunters with water pistols and even a special appearance by Michael Jackson, just in time to shake his bones to the tune of “Thriller.”
All of this will lead up to the “final destination”: The Dark Tower, a short walking distance from Plaza Herrera, where a terroriffic Halloween party awaits with a special performance from Internationally-renowned Panamanian rock band Filtro Medusa, playing all their hits as well as brand-new songs for the first time.

Filtro Medusa joins the exclusive list of bands who have wrapped up the Zombie Walk in its 5-year history,. The list includes punk rocker Pepe Calavera and hardcore rock band Rencilla, who return to the fold in a special performance at the Pavo Real bar in Via Argentina, broadening the range of options for those in attendance.

Casco ghouls up to receive both zombie and human alike to have a night of fun in this historic area. The Walk is slated to end at 11pm, the ideal time for participants to see what Casco Viejo has to offer for them, go to the Pavo Real bar and join the most hardcore party in town, or choose their own adventures.
Though it’s not strictly necessary to dress up as a zombie to participate in the Walk, doing so brings with it benefits: both the Filtro Medusa in Casco Viejo and Rencilla at Pavo Real concerts will be free for every zombie. If you don’t have you bracelet, the cover for the Rencilla concert and Grannada Bloodshed and Mala Hierba will be $5, and the cover charge for the Dark Tower with Filtro Medusa and Halloween Party will be $8.

Everything is ready to make of Casco Viejo the best Halloween event in Panama. Sign up, walk with us and live a frightful night you’ll never forget!

The Zombie Walk by Porto Diao, this Saturday October 30th starting at 7pm in Plaza Herrera, Casco Viejo. This event is for all ages, genders, sizes, colors and flavors. Signing up is free from 7pm-9pm in Plaza Herrera. Get your bracelet ONLY during sign-up to enjoy the promotions and free cover charges for participating concerts.

The Walk begins at 9:30pm along Avenida A, passing through the different sights Casco Viejo has to offer such as the Arco Chato and other ruins of over 500 years of age, the beautiful National Theater and Bolivar and Cathedral Plazas.

The Zombie Walk will end approximately at 11pm at the Dark Tower, on Ave. Central diagonal to Plaza Herrera with the Grand Post-Walk Halloween Party and Filtro Medusa in concert. Alternatively, you may trek to the Pavo Real bar in Vía Argentina for the Hardcore Post-Walk Party with Rencilla, Grannada, Bloodshed and Mala Hierba. Those with a bracelet go in for free; if not, cover is $8 and $5 respectively and the party will go on until the last un-dead leaves.

For a list of participating businesses in the Zombie Walk, pics and videos of past Walks, this year’s route and more details about the event, visit the Porto Diao web portal at www.portodiao.com or send us an e-mail at info@portodiao.com.