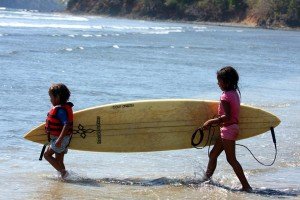 (Surfline.com) The International Surfing Association is pleased to announce that the 2012 edition of the ISA World Junior Surfing Championship, the largest junior surf competition in the world, will be held in Panama from Saturday, April 14 until Sunday, April 22.

Nearly 300 of the world’s best juniors from 35 countries will meet in Panama for the tenth edition of what has become the greatest indicator of tomorrow’s surfing elite, and the path for the champions to the world pro tour.

Both the ISA and the Panamanian Tourism Authority are thrilled to announce the destination of next year’s event after receiving several attractive bid options for 2012. ISA President Fernando Aguerre stated, “The surf in Panama is exceptional, and after having great success with the 2011 World Surfing Games (Playa Venao) and the 2010 World Masters Surfing Championship (Santa Catalina), we are eager to bring our Junior World Championship to the perfect, rippable waves and tropical weather of Panama. The ISA is looking forward to a great ISA World Junior Surfing Championship in 2012 at this surfing paradise.”

The ISA is proud to partner again with organizer and local surfer Patrick Castagnet and his wife and business partner, Tuti de Leon, for the third year in a row to make this event possible. The Directors of Surf Box said, “The ISA World Junior Surfing Championship is by far the greatest and most prestigious junior surfing event in the sport. We are proud to welcome nearly 300 of the world’s hottest Under 18 surfers and see them enjoying the perfect waves and offshore winds that we expect every April in Panama. We are looking forward to a great event!”

Panama has consistent waves all year long, both along the Pacific and the Atlantic coasts. The warm tropical climate and friendly people make it a perfect destination for this highly competitive surfing event, which will feature the best Under 18 Boys, Under 16 Boys and Under 18 Girls in the world.

The exact break where the event will be held is going to be announced soon. Stay logged to www.isasurf.org

After nine years, surf brand Quiksilver will no longer be the title sponsor of the ISA World Juniors. The ISA appreciates and thanks all of those at Quiksilver, led by Chairman Bob McKnight, who made this long-term partnership with the ISA possible. The ISA will announce a new title sponsor soon.

ISA membership includes the surfing National Governing Bodies of 69 countries on five continents. Its headquarters are located in San Diego, California. It is presided over by Fernando Aguerre (Argentina), first elected President in 1994 in Rio de Janeiro and re-elected seven times since. The ISA’s three Vice-Presidents are Alan Atkins (AUS), Karín Sierralta (PER) and Debbie Beacham (USA).