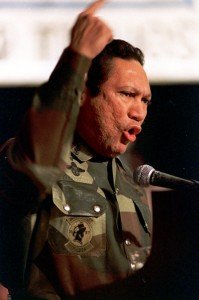 (Prensa.com) Manuel Antonio Noriega “is very optimistic” about his pending return to Panama, said a former colleague who has remained in touch with the former military dictator.
“It’s something he has waited for for a long time,” said Mario Rognoni, who served in the government during the military dictatorship. “He was very heartened by the idea of being back with his family.”

The French Ministry of Foreign Affairs reported Monday that it is preparing the paperwork for the extradition of the former dictator to Panama. Once that paperwork is completed, Noriega would have a month to challenge it in court, something he is unlikely to do.
Noriega faces more than 67 years in prison for crimes he allegedly committed during his regime, which lasted from 1983 until he was ousted in 1989.
Noriega served a 20-year sentence in the United States for drug trafficking and is currently serving a seven-year sentence in France for money laundering.
Rognoni, who was a trade minister under Noriega, congratulated President Ricardo Martinelli for having the “dignity” to request the extradition of the former dictator.
Government Minister Roxana Méndez announced Monday that a cell is being prepared for Noriega in El Renacer Prison, outside of Panama City. That cell will have special security to protect the former dictator, as well as to accommodate his health needs.
Rognoni said that the Panamanian government “is obliged to guarantee the safety” of the former dictator because of his age and health problems.
But Carmenza Spadafora, the sister of Hugo Spadafora, who died during the military dictatorship, said she thinks that Noriega will be released “in a matter of days.”
Please follow and like us: