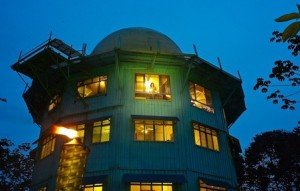 (Greeley Tribune) The fierce blood-curdling scream of the howler monkeys at 5 a.m. introduced me to the calls of the jungle at the Canopy Towers in the Republic of Panama. Previous visitors had warned me of the howler’s territorial call, so I had looked forward to it. A cup of hot tea and the climb up to the top of the tower to watch the sunrise and brilliant tropical birds come to feed along with the monkey howls were the before-breakfast activity.

Keel-billed toucans, parakeets and parrots called and flew around the tower. An iridescent green honeycreeper and his mate ate in the flowers about level with the tower floor and 3 feet out.

What a change with the foliage, colorful birds, hummers whizzing around the feeders and a slight earthquake tremor. It all brought the reality to my life just a few hours from the snow and cold of Colorado.

When the United States pulled out of the Panama Canal, Raul obtained a lease to the property. By adding windows and two floors with rooms for sleeping and converting the main radar facility floor into a windowed all-purpose room with a library, dining room and couches and hammocks for relaxation and conversation, Raul de Para created an eco-hotel.

There have been many famous visitors to Canopy Towers, including Jimmy and Rosaline Carter, Sir David Attenborough, Martha Stewart, Angelina Jolie, Brad Pit, David Sibley and Mariel Hemingway and daughter. The days were packed with trips to destinations in the jungle, led by extremely knowledgeable guides who spotted them instantly, returned the calls of the birds with their own whistles, and put up a scope for everyone to see.

We traveled along the Panama Canal five different days to the town of Gamboa and the world-renowned birding site the Pipeline Road. This was a pipeline never finished but started as protection for the transport of oil in case of an attack on the canal. It is now a road into the jungle that has been preserved and is used for tourism.

Our rides into the jungle were in the back of a truck with two benches back-to-back running the length of the truck bed. A very good system to ensure all of us could see the birds along the way, and a welcome cooling ride after a morning of birding in the jungle. There was always a large cooler full of ice and drinks under the seats.

There are more than 900 indigenous birds in Panama, not counting the migrants that bring the total near to 1,000. Comparing that to North America’s 700 species, it’s no wonder there is a different bird to see every few minutes. We saw a few North American migrants, warblers especially, like bay-breasted, black and white, yellow and chestnut-sided.

Raul is a declared environmentalist or green advocate. The whole operation is planned around how best to save the environment and preserve the birds. There is no air conditioning because the noise frightens the birds. There are huge fans in the rooms with the windows left open that promote a cross breeze and were sufficient in keeping the building comfortable. With a spotlight, we searched the jungle for the night life in the bird mobile.

We waited for the tai chi-like movements of the sloth so we could see his face. There were monkeys, an armadillo, a screech owl, a forest rabbit and an agouti also showcased in the beam of light.

Our group saw 150 birds in my six days of birding. The colors of the motmots, toucans, trogans, hummers and many other birds too numerous to mention were a thrill of a birder’s life. Panama City’s Toucumen Airport is seven air hours from Denver. Panama is the only Central American country with potable water from the faucet. I drank from the faucet all the time. Yellow fever and malaria do not exist. If fact, there were few insects, as windows were left open day and night.

It is an easy country to visit, and the birds are spectacular.

Norma Erickson is a longtime bird-watcher who lives in Greeley.