(InternationalLiving) The New Year got off to a busy start as local news sources in Panama were busy reeling off stats and predictions. At the beginning of January, Panama President Ricardo Martinelli announced that the economy would grow by as much as 9% this year. (Per government projections, the economy grew approximately 7% in 2010.)

According to Vice Minister of Trade Jose Domingo Arias, Foreign Direct Investment will reach $2 billion this year. According to Arias, FDI of 2010 stood at $1.7 billion by the third trimester of 2010; a 12%-increase as compared to the same period in 2009. Says the government official, FDI continues to grow thanks in part the investment grade ranking awarded to Panama by agencies like Standard & Poors in 2010.

In addition to FDI, say local sources, growth is expected in tourism revenue for 2011.

According to local daily newspaper, La Prensa, tourism grew 6% in 2010, a hefty increase over 2009, in which tourism grew only 2%.

Though official statistics have yet to be released, data collected thus far indicates that Panama received 1.7 million visitors in 2010 and will receive at least 1.9 million in 2011. The projections are good news for business owners (and potential entrepreneurs out there), particularly in the tourism industry.

Panama has long been a growing hub, thanks to Copa Airlines. The nation’s premier airline has done much to make Tocumen International the “Hub of the Americas,” as it is known. Panama’s tourism authority has also been hard at work, lobbying airlines around the world to establish flights to Panama.

And other airlines may soon follow suit. According to government officials, airlines such as Australia’s Qantas, Emirates Airlines and Flydubai, and Japan’s All Nippon are interested in establishing flights to Panama in the near future.

With its international airport becoming a mega-hub, a growing roster of international conventions, and more hotel rooms in the pipeline than any other country in the region, Panama is poised to profit from steady increases in arrivals.

Also fueling the economy this year are megaprojects such as the $5 billion Canal expansion, currently entering its fifth year.

Other massive undertakings include a new 13-kilometer metro line. The $1.3 billion line will be Panama City’s first, and is currently in the design phase. On December 15, local agencies and organizations were invited to examine the project’s Environmental Impact Study (EIS) at the Istmo University in Panama City.

Following a public bidding process that culminated last November, a local consortium has already been chosen to build the new metro line. French firm Alstom has already been chosen to supply the actual train cars. By 2035, the government plans to have an entire network of metro lines in place all over city. Construction on the first line, or “linea uno” should begin later this year.

Additional mega-projects include the new city at Panama Pacifico (one of the region’s biggest such developments) and a new “Government City” that will cost an estimated $450 million to build. The government has also announced ambitious infrastructure projects for this year, including roadworks and continuing airport and port expansion projects.

On the downside, the government will have to designate millions of dollars to help repair damage caused by incessant rain and floods in 2010. Latin American countries like Venezuela and Colombia were hit the hardest by the unusually wet weather, but Panama has had its fair share of woes this year. Per local news sources, damage to access roads leading to the Centennial Bridge alone will take some $15 million to repair.

Editor’s note: Learn more about Panama and other countries in our daily postcard e-letter. Simply sign up for IL’s free postcards 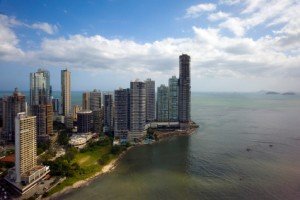