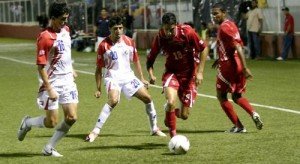 With three points apiece, Panama and Costa Rica are joint leaders in the three-team Group 1 after two rounds. Nicaragua, which lost its opener to Costa Rica, is in last.

Waterman struck in the 54th minute for the hosts, displaying great skill to send a Gabriel Avila pass out of goalkeeper Aaron Cruz’s reach.

The opening forty-five minutes were evenly contested with much of the play taking place in midfield, resulting in few scoring opportunities. The best chance fell to Waterman in the 16th minute, but his well-worked effort was stopped by Cruz.

Near the end of the half, Juan Bustos nearly put Costa Rica ahead. Panamanian goalkeeper Luis Mejia, however, managed to save the 18-year-old’s header.

After the interval, Panama almost added to its lead on two occasions.

Two minutes after Waterman’s goal, Rolando Botello hit the crossbar with a right-footed blast from 30-yards out.

David Ramirez nearly earned a share of points for Costa Rica in the 82 minute, but like Botello, his effort rebounded off the crossbar.

Panama and Nicaragua will conclude Group 1 play with a meeting on Saturday. The top two teams will qualify automatically for the CONCACAF Under-20 Championship next April in Guatemala.