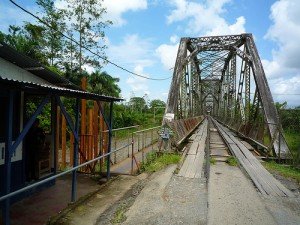 (Prensa Latina) The Governments of Panama and Costa Rica have signed an agreement allowing free crossing of their borders by citizens from both countries, the national Executive confirmed today in a press release published at its official website. According to the source, the agreement was signed during the opening ceremony of the International David Fair, where in the presence of President Ricardo Martinelli, his Costa Rican counterpart Laura Chinchilla presented and passed on to the relevant Panamanian authorities the document that establishes the possibility of moving from one country to the other without use of a passport.

Martinelli and Chinchilla opened the 58th David Fair yesterday, where the president of Costa Rica spoke and gave the Governor of Chiquiri, Aixa Santamaria, the new document that Costa Rican and Panamanian citizens will be able to use.

This step shows that both nations enjoy a strong relationship based on mutual trust, in addition to a shared demilitarized border, said Chinchilla.

Martinelli said that the relations between both governments are solid and they would keep taking important steps in the interest of the two nations. He also said the establishment of an identity card to enter both countries is a significant step forward.