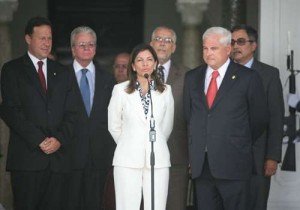 (Panama America) Panama and Costa Rica today agreed to strengthen their trade relations in order to enhance economic growth in the southern region of Central America, after a day visiting the Costa Rican president, Laura Chinchilla.Chinchilla and his Panamanian counterpart, Ricardo Martinelli, signed also an agreement of understanding, and moreover facilitate the movement of people and goods across their common border, after an evaluation of their governments.

The president participated as guest of honor at the opening at the trade fair Expocomer 2011, where he said that “Panama is not only a strategic partner (but) is an ally in the promotion of projects that promote economic growth in the region, thanks to the privileged geographical position and infrastructure being developed by both countries.

In this regard, he cited the example of the opportunities that the expansion works of the Panama Canal and the construction of a large container terminal in the Atlantic Costa Rica.

However, he noted that the most important challenge faced by both countries is to further improve competitiveness and to that end, in the case of Costa Rica, spoke about the openings that have occurred in the insurance and telecommunications markets after decades state monopoly in these sectores.Por its part, Martinelli said that Panama and Costa Rica not only profess the same religion, language and customs, but have a mutual desire to “move forward and overcome all the obstacles that we have a product of the global crisis “.

Also, the Panamanian president spoke about the possibility of working together in a tourism campaign, promoting various parts of the region and Martinelli fronteriza.Chinchilla signed after his participation at the trade fair, a memorandum of understanding, which seeks “establish a permanent high-level mechanism for coordination and cooperation and trade integration.”

Also strengthen the position and bargaining power of both countries against agreed comerciales.Según partners, will set up a standing commission to deal with issues relating to trade between both countries and that over a period of four months to develop a joint plan run to schedule, financial conditions and methodology for carrying it out.

Both leaders said at a press conference welcomed the agreement, arguing that it is one of the first initiatives between the two countries to strengthen their relationship comercial.Asimismo, saw the proposal may soon make a joint cabinet in the Costa Rican capital, with the intention to address trade issues, investment and security, among others.

Similarly, Chin said his government will discuss in the coming months Martinelli’s proposal to eliminate immigration controls at the border, using only the personal identity card for entry into either country.

He said that not only have to look at the immigration issue but also take into account the issues of public health, safety and smuggling of timber and livestock, among others.

Chinchilla met in Panama a one-day visit that ended Martinelli accompanying the opening of the construction of Metro Line One of Panama, a Panamanian leader projects to relieve traffic congestion in the capital city.