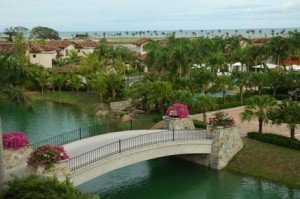 (Palm Beach Daily News) If I were writing a travel slogan for this uniquely “S”-shaped country that connects North and South America, it would go like this: “We’re not Colombia. We’re not Costa Rica. We are Panama.”

It’s short. It’s to the point. And it might get listeners and readers to take a fresh look a why this land of mountains, extinct volcanoes, virgin rain forests and wide beaches is a must-see from a topographical point of view.

Oh, and did I mention that it’s also a naturalist’s paradise?

Panama is an emerging country with a past as rich as it is riveting. There’s the discovery of gold and the Pacific Ocean that brought the good, bad and the ugliest of explorers there centuries ago.

Within the last 100 years, the building of the Panama Canal and the Pan-American Highway have both spurred the country’s growth and development. And in this century, the love of all things green is turning tourism into a thriving industry. Gone are the days when all visitors saw of Panama was the view from the deck of their cruise ship as it navigated the canal.

People from practically every culture on Earth make up Panama’s population of 3 million. Nearly half live in Panama City — you’ll even find a Chinatown there. Building cranes dot the city’s Miami-like skyline, where a swanky new 40-story condo might stand next to a ramshackle building.

My trip was too short to see the entire country, as I spent only two nights in Panama City and another two on the Pacific coast. But will I return again? Absolutely. Until then, here’s a listing — in no particular order — of things I’ll bet you didn’t know about Panama.

■ Nature dealt this 29,339 square-mile land a magnificent hand. Panama is a bird- and butterfly-watcher’s and orchid lover’s heaven. You’ll find 975 species of birds — a good 300 of them always present, no matter the season — and 16,000 species of butterflies. Then there’s the flower-and-fauna thing in staggering abundance at places like the Gamboa Tropical Rainforest Reserve and the Soberania National Park. Look for a number of the 1,000 types of orchids in Anton Valley. Combine all, and you’ll continually be both enchanted and awed.

■ It’s the U.S. dollar, baby. No need to concern yourself with money exchanges, although measurement conversions are something else. The country does have its own coin currency, called the Balboa, but there’s no need to use it. You’ll find the price of gas measured in gallons and about the same as it is here: $2.70 for a gallon of regular. Then again, milk is measured in liters.

■ Pay is lousy. The minimum hourly wage in Panama is $1.89 — and that’s up from 90 cents. That means a bartender or housekeeper will likely earn about $350 a month.

■ The Panama Canal rocks. Since it opened in 1914, cargo ships, boats of all sizes and cruise ships have been using this canal. It’s a wonder to see, and the museum at the site is worth your time.

■ The Panama hat actually hails from Ecuador, but buy one anyway. Wide-brimmed ones are best suited for bigger folks, thinner brims for smaller people. Woven from fibers of the silky toquilla straw plant, a good Panama hat is supposed to be able to hold a glass of water. But don’t wear yours in the rain. They’re made to provide you with a cool head and shade you from the sun, but they wither when wet. Al Capone so loved these hats, I’ve heard, he employed a weaver of his own.

■ Donald Trump has discovered Panama City. The Donald is building a 70-story building, the Trump Ocean Club, along the coastline. It resembles Dubai’s sail-shaped Burj Al Arab hotel. When completed, The Donald’s club will include luxury condos, a five-star hotel, a private yacht club, restaurants and, of course, a casino.

■ Noriega doesn’t live here anymore. Apprehended at the Vatican Embassy in 1989, former president Manuel Noriega is now doing jail time in France, while the home he once occupied in Panama City stands idle. Apparently nobody wants to buy it. Curiously enough, should Noriega manage to get out of jail and return to Panama, he’d be a free man. The reason? He’s 72, and no one in Panama is jailed after the age of 70.

■ Panama’s deep geographic position between Costa Rica and Colombia allows the tourism folks to bill it as hurricane-free. Really. Yes, there’s a rainy season from mid-April to December, but what’s a better selling point than a lush tropical climate void of nasty hurricanes? No wonder so many Americans who love Florida’s climate are moving there.

■ Great tour operation: Panama Star (www.panamastar.com) served me well. Ask for Rina as your guide. She’s incredibly knowledgeable and has a not-in-your-face wonderful way about her.

■ Great lunch or dinner in Casco Viejo, i.e. Old Town: S’cena on Casco Antigua is a must. I had the sea bass special on a bed of asparagus and cheesy potatoes. Incredible.

■ Great massage: The Spa at the Bristol Buenaventura Resort in Cocle offers a 90-minute Buenaventura Massage that ranks as one of my best-ever massages. My masseuse combined the Hawaiian Lomi Lomi technique with shiatsu pressure techniques. She used warm oils, placed warm pillows under my neck and shoulders at times, and tickled my face with tiny stones near the end of the treatment. From the massage, I moved to the relaxation room. And oh, my – all of this for $145!

■ Great accommodations: There are only two Panama properties that are members of The Leading Hotels of the World. Both are Bristol hotels and both worthy of their membership status. (Full disclosure: I was a guest at both.) The Bristol Panama is in Panama City and offers a great in-town location for the business person who would enjoy a comfy night’s rest and the culinary talents of celebrity female chef Cuquita Arias. The Bristol Buenaventura on the Pacific coast is a 1,000-acre property less than 2 years old. Family-oriented, it offers guests accommodations in the hotel or individual villas. There are pools, outdoor activities – including tennis, sailing, fishing and horseback riding – and even a charming chapel the owner-developer built in honor of his mother. For more information on either, visit www.bristol.com or www.bristol.com/buenaventura.

Panama’s Tocumen Airport is less than 11 miles from Panama City. When traffic is light, you can get to town in about 20 minutes. During jam-time, who knows?

American Airlines offers daily flights from Miami International Airport to Tocumen. So does Copa Airlines. The next time I fly to Panama, I’ll try Copa. My American Airlines experience was exasperating. It took three planes to get me to Panama on what should have been a 2-hour-and-35-minute direct flight.

The first plane, we were told, had hydraulic problems, while the second plane, fresh from an overnight stay in a hangar, had pressure problems.

My morning flight was eventually canceled, and I was booked on an evening one and given a $10 airport food voucher, which seemed, well, about par for my troubled day, as a bottle of water costs $2.90 at Miami International.
By DIAN VUJOVICH