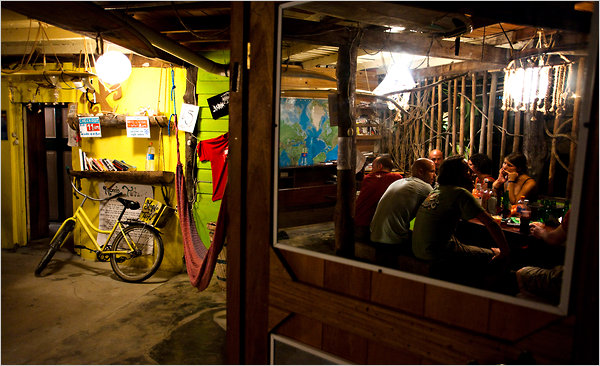 Tito Herrera for The New York Times. At Mondo Taitu, a hostel owned by a group of expatriate Americans in Bocas del Toro, off the Caribbean coast.

(NYtimes) On a humid morning in Panama City earlier this year, three Americans, two Swedes, two Portuguese, two Irish and three Israelis sat down together for breakfast. The diverse group was united by a single interest: free pancakes, a standard perk at Luna’s Castle Hostel in the city’s historic district.

The American-inspired meal, along with the international crowd it attracted, is typical of the growing multicultural presence in this country, which is drawing foreign visitors as well as entrepreneurs — including the three Americans who run the mini-empire of hostels in Panama that includes Luna’s. Emboldened by low costs, easy access to imported products and the power of strong word of mouth, new businesses founded by American expatriates are popping up all over the city.

Luna’s Castle Hostel (Calle 9na Este 3-28; 507-262-1540; lunascastlehostel.com), which opened in late 2008, is one such outfit. Flanked by crumbling, regal facades and colorful residences, with an unadulterated ocean view, it hums like the well-oiled machine that it is. The three original owners — Daniel Smetana, Daniel Saxe and David Harmatz, all 28 — have lived and breathed Central America for almost six years. Under their careful watch, Mondo Taitu Hostel in Bocas del Toro, off Panama’s Caribbean coast, has earned a cultlike following among backpackers. (They recently sold the place to a group of 20-something Americans, continuing the expatriate connection.)

“A hostel is a home away from home,” Mr. Smetana said. And indeed, Luna’s offers amenities like a movie theater, a Ping-Pong table and that free pancake breakfast. Its recently opened bar, Relic, has quickly become a magnet for travelers and Panamanians alike.

In Panama City’s district of El Cangrejo, the Arkansas native Jon Hurst offers a different taste of America. His shop, New York Bagel Cafe (Einstein Plaza, Calle F; 507-390-6051), has been sating mostly expat carbohydrate cravings since 2006, with fresh-baked bagels, bacon and eggs and bottomless cups of coffee. “Panama is a key location to open up a business if you’re looking for something similar to the United States because you can get a lot of imported product” via the Panama Canal, Mr. Hurst said.

Easy importation has been important to Armon DeMarco as well. The 32-year-old Pennsylvania native and pastry chef owns Chocolatisimo (Calle 56 Y Avenue Abel Bravo; 507-391-3255; mychocolatisimo.com), a specialty chocolate and pastry supply store in the capital. Mr. DeMarco imports all of his products, which include nuts, dried fruit, pastry supplies and Belgian chocolate. He then transforms them into items like chocolate-covered pretzels, chocolate-dipped apples, and truffles.

Blayne Ladner, 34, who moved to Panama City from Mississippi in 2006 after losing everything in Hurricane Katrina, is also taking advantage of any imports he can find. His Super Gourmet (Avenida A, between Calle 6 and 7; 507-212-3487; supergourmetcascoviejo.com) is a deli/ grocery that stocks hard-to-find items like French marmalade, prosciutto, organic cereal and sushi rice, and serves homemade soups, sandwiches, and local Balboa beer on draft to a loyal customer base.

“People in Panama know my story, and they want to see me succeed,” he said. “I’m a part of the community. Panama has been good to me.”