If you want to get to know Panama, there’s no substitute for traveling by road. Though taxis and buses are cheap and plentiful throughout the country, rental car is an affordable (even a 4×4 SUV rental will cost only $550 a week including insurance and tax) way to travel between Panama’s most popular destinations, Panama City on the Pacific south coast and the Bocas Del Toro archipelago on the Caribbean north—roughly 300 miles.

Despite being less than a five-hour flight from the southern half of the States, Panama is surprisingly unsullied by North American commercialism. Even the chain restaurants of Panama City are few and far between. The capital, with its cosmopolitan allure and wealth of foreign investment, can be forgiven for some skyline-enhancing over-development, but unlike in its pricier northern neighbor, Costa Rica, the countryside hasn’t fallen prey to the condo bubble or its bursting. And once you’re off the Pan-American Highway, civilization is relegated to the miniature towns of bucolic Latin America.  Of course, if Panama goes the way of Costa Rica, it won’t always the case. Here are five destinations to visit in Panama now. 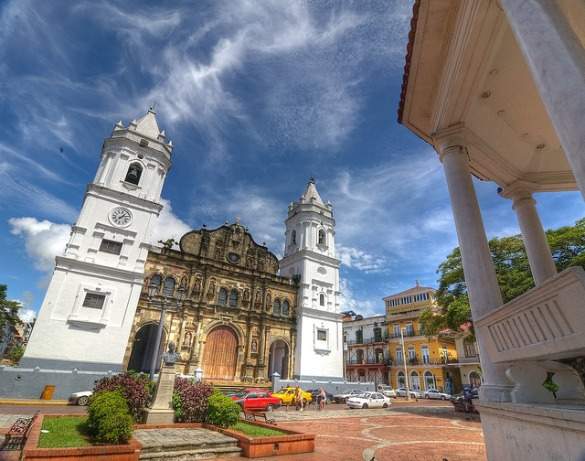 A half hour ride from Tocumen airport, Panama City’s blast from the past allows visitors to lose their sense of time and place. Indeed, along the tiny peninsula’s centuries-old eastern wall is a panoramic view of downtown’s shockingly high modern skyline. Archaic and hip, edgy yet safe, bombed-out but beautiful, the area has been revitalized though not overexposed. For now.

Built in 1673, Casco Viejo is one of the oldest standing cities in Central America, but it’s only half a decade into gentrification. After the U.S. leveled a chunk of it during the 1989 invasion to capture Manuel Noriega, squatters and gangs settled in. Since it was named a 2003 World Heritage site (called Casco Antiguo), however, the government has shooed the undesirables north, outside the historic district and further from the president’s well-guarded Palacio de las Garzas. Guidebooks still caution tourists about walking after dark, but the Casco Viejo experience is increasingly safe for visitors and entrepreneurs alike. The Policia Turisma sees to it.

A 15-minute stroll in the Casco Viejo will take you from the central Plaza de la Independencia (where sovereignty from Colombia was celebrated in 1903) to the south end’s Plaza Francia, part of a statue-strewn promenade along the Pacific with views of the Bridge of the Americas. Walk up Avenida A and stop by several art galleries and the remnants of the Convento de Santo Domingo on the way to Iglesia de San Jose with its famous Golden Altar, saved from pirates who sacked Panama’s first settlement. French and Spanish colonial facades and their wrought-iron balconies line Viejo’s 30-odd blocks of narrow brick and cobblestone streets—but many are hollow shells filled with broken beams and trash. Still, chilling on the corner is Tequila Bar, a casual-cool hangout with quality mixed drinks and tasty nachos.

Though a lot is happening among the ruins of Casco Viejo; the action is hidden behind the understated romance of this new Old World.

>> Search for hostels in Panama City 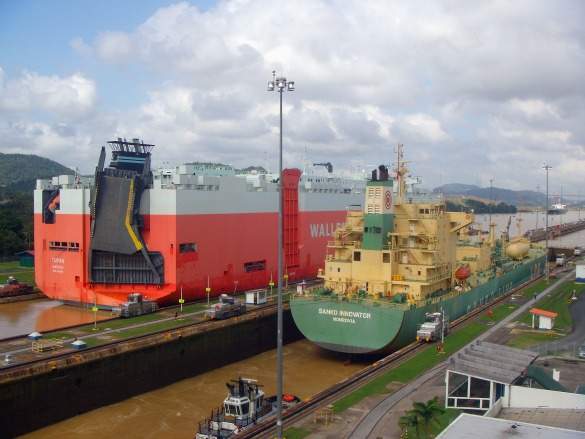 First, provided you get there as a ship is beginning the lock process—arrive either 9 to 10am or 3 to 4pm—you can get the full locks experience in less than two hours. The century-old locks raise a gazillion-ton supertanker up and lower it down using only water, a process that represents an unparalleled technological achievement. Sure there are other canals and locks, but not in this moist-green-valley setting punctuated by the futuristic New Millennium bridge. There’s no experience like it in the world.

Panama is an excellent place for not feeling pressure to have done anything in particular—except see the Canal (all your friends and coworkers will ask about it). It’d be another thing if you had to wait on line or pay admission for a slew of famous museums and monuments. But the rest of your trip, especially outside the capital, might seem so non-touristy that you’ll welcome the cute mugs at the Miraflores gift shop. Plus, for an $8 entrance fee, you did the due diligence of enriching yourself on vacation. 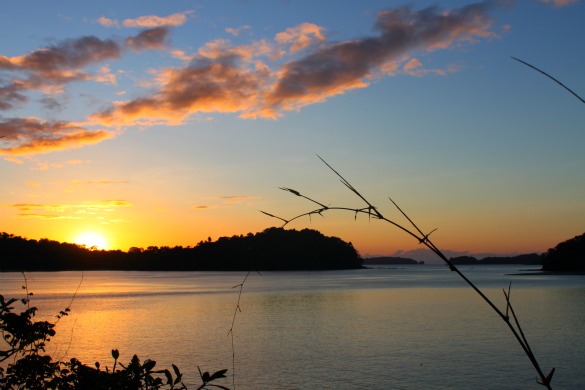 A half-hour ride south of the Pan-American Highway from the Horconcitos turn-off, the water-taxi man is waiting for you at the Boca Chica village dock. And for $2 apiece he’ll whisk you away to Boca Brava.

Mostly uninhabited except for a stunning array of wildlife, the island comprises tropical forest–covered hills. In lieu of roads, miles of hiking trails both obvious and subtle crisscross the lush growth that features 12 kinds of orchids. As you explore, keep your eyes out for the 280 avian species, from hummingbirds to turkey vultures, the inhabit the surrounding trees. Keep your ears open for the haunting concert of the Howler monkeys, one of three species of easy-to-spy primates, and find your way down sloping paths near the coastline to peaceful, swimmable beachlets.

Overlooking the sea and a smattering of nearby atolls, the open-air bar/restaurant/lobby of the Hotel Boca Brava is an appropriate laid-back base. Designed by its former German-architect owner, the multilevel terrace of this compound, built into the cliffside landscape, is made for sunrise viewing. Opt for a private bathroom (average: $65) or rough it in a hammock (up to $10), and enjoy a variety of good food and strong drinks as well as meeting fellow travelers. Hotel Boca Brava, the only place to stay (or eat or find amenities) less than three years ago, has been joined by the higher end eco-resort Cala Mia. Back on the mainland, Boca Chica offers mini-resorts and lodgings at various price levels.

Due to sediment from the Pedregal river, visitors won’t find picturesque beaches on Boca Brava itself, but they are only a boat-excursion away, along with sport-fishing, scuba-diving, kayaking and surfing—any front desk is replete with info on tour activities. Hotel Boca Brava offers a six-hour boat tour to tiny, uninhabited Bolanos and Gamez for $20 per person, with snorkeling (gear provided) and lunch (which costs extra, aside from freshly dashed coconut) on some of the clearest bath-warm beaches in Panama. Boca Chica and Boca Brava provide prime starting points for checking out Chiriqui and Coiba National Marine Parks, where the diversity and amounts of plant and animal life—whales to butterflies—are multiplied hundredfold from Brava.

>> Search for cheap flights to Panama

The Road to Almirante 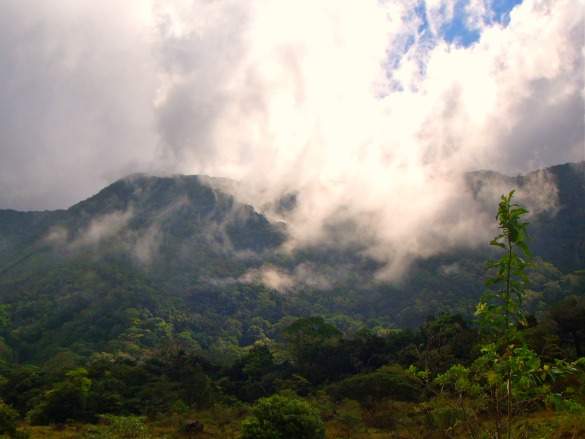 Before turning north off the Pan-American at the mini-town of Chiriqui toward Almirante—where a port to Bocas Del Toro sits—make sure you or your driver has provisions, such as gas, food and water; there’s no civilization for at least two winding hours. The road is not named and it is not mentioned in any guidebooks, but it is clearly marked on most maps. Owing to Panama’s status as continental connector and international trade route, the road is paved smooth with a minimum of potholes (much easier on the nerves than the popular but rocky path up Costa Rica’s Monte Verde).

The first half of the trip is a gradual ascent. The towns are gone, leaving only hills and valleys, in shades of green from hunter to lime, spread out like a landscape painting. Up ahead is a vertical jungle where clouds peek out from between shadowy gorges. The Pacific glimmers in the distance beyond the vast swath of unbesmirched land. The only problem: It is in the opposite direction, so pull over and take a long look at where you came from. Stop again when you hit the manmade lake and damn (a major source of hydroelectric power) that pops out of the peaks at nearly 5,000 feet. Stop when you think you’ve reached the top, and again when you actually reach it. Stop for at least one waterfalls near the very beginning of the descent (which is not as steep) and again when you first glimpse the Caribbean Sea seemingly so far off.

This road winds, rises and declines through Chiriqui province’s Fortuna Forest Reserve Park, a small portion of Cordillera de Talamanca—the mountain range that marks the continental divide and boasts the tallest points in both Costa Rica and Panama. Occasionally you’ll pass the shuttle-vans that bus the locals as they stop, but traffic is not an issue. No guidebooks mention this drive, but it might be the surprise treat of the trip.

>> Read more about driving in Panama 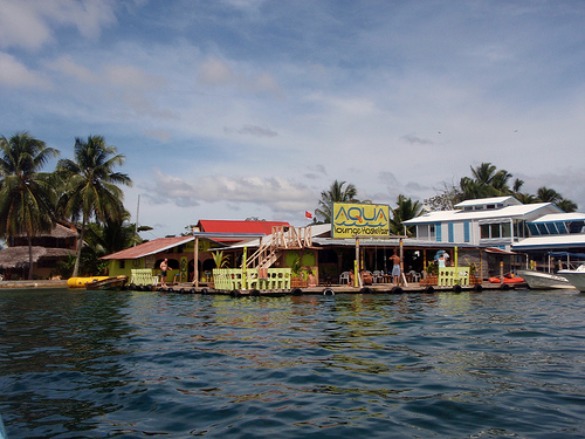 The only civilization in this Caribbean Archipelago, Bocas Town on Isla Colon is a 30-minute boat ride from Almirante and costs $4 a pop from Taxi 25 or Bocas Marine Tours (BMT). The second biggest tourist attraction in Panama, the area has a lot going for it. One is the quality of the “tourists”: the masseuse from Israel in for three weeks; the Australian backpacker for three months; the German expat for three years; and the French family in for three days get along swimmingly. The other tourists are Panamanians, particularly when the dry season begins in late November. And all together they form a relaxed community with the local Afro-Caribbean business owners and service folk who live on Isla Colon. There are few Americans, which can be perfect for a real getaway.

The main draw is, of course, the tiny islands, mostly uninhabited, in and around Bastimentos National Marine Park, where you can get away from all of the above. A tropical mini eco-system and empty clear-water beaches that rival any in the Caribbean are at most an hour across the water. Like Boca Brava, Isla Colon itself has no white sand beauties, so you have to earn your slice of paradise. Tour operators (BMT, Jampam) make their presence known and water-related sports, from jet skiing to diving (Bocas Water Sports), abound in this destination for surfers. Bocas Town itself is a simple, convenient urban outpost.

Settled in 1826, the area grew in importance when United Fruit (now Chiquita) set up there at the dawn of the 20th century. Efforts to preserve the original wide streets—where pedestrians have organic right of way —and its rows of historic two-story wood houses are ongoing. By foot, the town grid is roughly 20 minutes end to end, including the airport and the ferry terminal, and there are accommodations for every budget. The heart of town, Simon Bolivar Park, is surrounded by colorful hostels, while reasonable B&B-style boutique hotels with waterfront decks line Calle I.

Finally, Bocas Town has a unique variety of nightlife (though the full range of options might not suit families with members over 50 or under 10). Mingle with locals at Red Star, with its balcony view of the park and bumping Latin music, or at unadvertised provincial casinos. Groove to live music with the post-26 bohemian set at El Toro Loco. Barco Hundido provides the requisite cheesy dance club, but the fact that it’s made of little more than rickety planks and dubbed Shipwreck Deck offsets a raucous young crowd. And though it seems a bit out of place, Bocas boasts a few internationally respected restaurants—in particular the French and Thai Pecado where the married Montreal owners are a fun fixture—allowing folks of any age to splurge in moderation.

>> Check out more lesser-known islands around the world

A few tips for visiting

Visit Panama during the dry season, December to May. Brush up on your Spanish—don’t expect cab drivers or even service-industry employees to speak more than broken English. Collect maps wherever you can and study them, as most roads outside the city don’t have names, even the major ones. Bonuses: Panama does dollars, and there’s little if any time-zone jet lag from the States.

Photo credits: Cascao Viejo by Chodaboy, Bocas Town by Eric Haller, all others by the author and my not be used without permission