The reforms, which have drawn protests from Panama’s environmentalists, labor leaders and indigenous people, among others, make it easier for foreign companies to invest in mining. 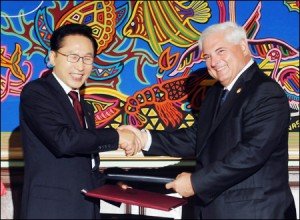 “President Lee expressed his satisfaction at the quick review the mining industry law under the excellent leadership of President Martinelli, “ according to a statement issued by South Korean’s Presidential House.

After the conversation, Lee also said that South Korean companies hoped to  increase their participation in natural resource development in Panama and in the infrastructure sector.

Others were not so pleased by the call.

“I think  Ricardo Martinelli’s mask has totally come off through this mining issue,” Sanchez Cardenas of the opposition People’s Revolutionary Democratic party said.  ”We had always said that he had gone to Korea to sell off the Panamanian territory and we were treated as liars.”

Martinelli says that his call to South Korea has been misinterpreted and that he was just promoting investment to Panama through a call organized by Vice President Juan Carlos Varela.