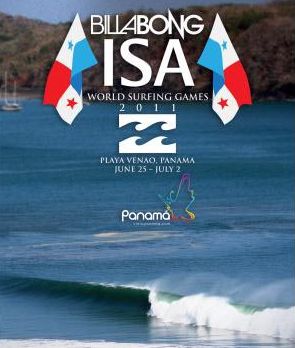 ) In two weeks, 200 of the world’s best surfers from over 28 countries will descend upon Panama’s beautiful Playa Venao to compete in the Billabong ISA World Surfing Games presented by Panama.

From June 25 until July 2, four Open Men, two Open Women and two longboarders from each country will vie for one of Surfing’s biggest honors, to earn a medal for their country.

In each of the three divisions, competitors will surf to win individual gold, silver, bronze and copper medals. The Fernando Aguerre ISA World Team Trophy will go to the nation that achieves the highest points total, taking all team members performances into consideration.

The Waves
The waves at Playa Venao, five hours southwest of Panama City, depending on the tide can be hollow beach-break barrels or perfect rippable left and right handers.

Teams to Keep an Eye On
Peru is the defending champion of the Billabong ISA World Surfing Games. Surfing as locals for the first time in 45 years, they proved they are a tough team to beat when they have the home field advantage. In 2011, they’ll have to uphold the title while competing in foreign waters.

Australia has the record of victories in the event, but will Team USA come back to winning form after their Gold Medal finish in the 2009 edition of the event? Brazil, the winner of the 2000 ISA World Surfing Games , is another contender.

Usual suspects like France (runner-Up in 2009), South Africa (winner in 2002), Tahiti and New Zealand will always be ready to surprise the rest of the field.

A little bit of history
The Billabong ISA World Surfing Games began in 1964 under the name ISF World Championships, and were run by the International Surfing Federation, the first surfing international organization in history. In 1976, the ISF gave way to the ISA. From their beginning and until today, the contestants in these championships traveled to compete as a team, to defend the colors of their countries.

In 1996, a year after the ISA was recognized by the International Olympic Committee, ISA President Fernando Aguerre proposed a name change to the World Surfing Games. He also created the Sands of the World Ceremony and Parade of the Nations to highlight the importance of the union of nations through surfing.

Last Year’s Edition
Was held at Punta Hermosa, Peru’s waves of Caballeros and Señoritas and the local team of Peru as the big winner. The teams that made podium were the following:
Gold: Peru – 14370 points
Silver: Australia – 14160 points
Bronze: South Africa – 11820 points
Copper: Brazil – 11340 points

ISA membership includes the surfing National Governing Bodies of 67 countries on five continents. Its headquarters are located in San Diego, California. It is presided over by Fernando Aguerre (Argentina), first elected President in 1994 in Rio de Janeiro and re-elected seven times since. The ISA’s four Vice-Presidents are Alan Atkins (AUS), Mike Gerard (USA) Karín Sierralta (PER) and Debbie Beacham (USA).

Watch the live webcast on www.billabongisawsg.com