(CNN) — Panama and the United Arab Emirates are crucial trade hubs thanks to two of the greatest engineering achievements of the 20th century — Dubai’s Jebel Ali port and the Panama Canal.

Proposals to build a canal across the Isthmus of Panama — the country’s narrowest point — date back to the 16th century according the Panama Canal Authority.

But the first major attempt to link the Atlantic and Pacific Oceans was undertaken by French Viscount, Ferdinand de Lesseps — developer of Egypt’s Suez Canal — in 1880.

De Lesseps’ plan ended in failure and bankruptcy, and it was left to the United States — under President Theodore Roosevelt — to take up the reigns and work re-started in 1904.

It is estimated over a quarter of a million men worked on the canal during 10 years of construction. 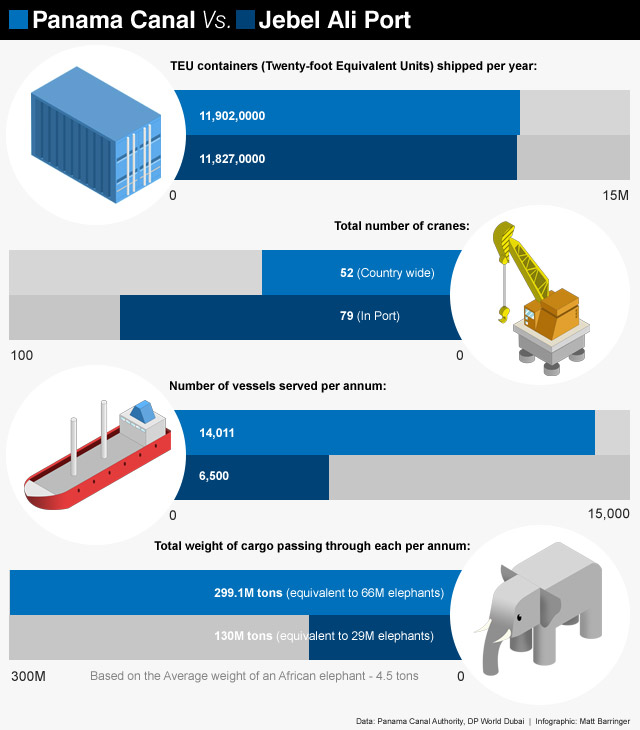 From the moment it opened in 1915 the canal transformed trade and slashed shipping times — shaving over 12,000 kilometers off a voyage from the east coast of America to the west.

The principle commodity is containerized cargo — nearly 12 million TEU containers (Twenty-foot Equivalent Units) passed through the canal in 2009 — followed by shipments of grain (mostly exported from the U.S.), fossil fuels and minerals.

The canal has three sets of two-lane locks — Gatun, Pedro Miguel and Miraflores. Each one is 33.5 meters wide and nearly 310 meters long and elevate vessels over 25 meters above sea level to the canal’s central Gatun Lake.

On average, it takes between eight and ten hours for ships to complete the 82 kilometer-long (50-mile) route.

The 1977 Torrijos-Carter Treaty — between the U.S. and Panama — agreed to hand control of the canal back to Panama in 1999, and it’s currently operated by the Panama Canal Authority.

In 2006, a referendum in Panama approved plans to increase the capacity of the canal. A program of expansion — adding two bigger locks as well as widening and deepening existing channels — began the following year.

The new $5.25 billion facilities, which will accommodate the world’s largest container ships, are expected to be open for business in 2015.

The mammoth engineering feat that is Jebel Ali port often gets overshadowed by its namesake palm island situated close-by, or by other banner projects like the Burj Khalifa — the world’s tallest building.

But the port’s importance to the UAE and the wider region is immense.

It has the largest man-made harbor in the world. It’s also is the biggest port in the Middle East and the sixth biggest in the world, transporting goods to destinations all over Europe, Africa and Asia.

The port covers a massive 138 square kilometers (52 square miles) — more than twice the size of Manhattan.

In 2007 the port handled 130 million tons of cargo and it can accommodate the world’s biggest (nearly 400 meters) container ships. Last year it handled over 11 million TEUs.

Seventy-nine cranes — more than Panama has in total — load and unload ships along quay sides, some of which stretch as far as 2.5 kilometers.

The port has continued to expand throughout its short history and plans continues apace today. The first part of a massive 15-stage extension was completed in 2007.

By 2030, the port’s owners, DP World hope to have created a mega-container terminal handling 80 million TEUs a year — three times as much as the world’s current largest port, Singapore, handled in 2009.