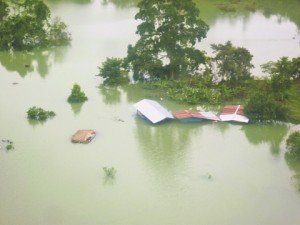 (Midiario) Some 519 homeomes affected in Darien, and six in Baru, Chiriqui, is the balance of the heavy rains that occur in both provinces.
As reported by the National Civil Protection System (Sinaproc), it is estimated that in Puerto Indio, Sambú county area, there are 187 homes affected, with a population of 400 inhabitants.
While in the area of ​​the settlers of the community there are 252 houses with 460 inhabitants, who suffered flooding.
In La Pita, in the same area, there were also 80 houses (610 people) affected by these rains.
Similarly, there were reports that several sectors of Jaque, El Coco, Los Llanos, and Mamey Biroquerá are also problems, but were not able to quantify the damage, because they are remote places.
Ronald Czech Sinaproc director in Darien, said it has activated a plan to get through the border police, can bring relief.
These effects are the result of 72 hours of heavy rains that occur in the Darien area, which have caused the rise in river levels, such as Chad. Reported losses in plantain, yam and others.

IN CHIRIQUÍ
On the other hand, in the community of Los Planes, Baru district, an area bordering Costa Rica, until yesterday afternoon had reported that six houses were seriously affected.
Of these six, four were almost covered by water.
Nicanor Montero, area resident, said that families remain anxious about the rise of water level in the river Palo Blanco, where he formed a landslide dam product of a mountain.
Sinaproc units, as well as technical and engineering experts conducted a flyover on the afternoon of Saturday, to know the magnitude of the reservoir and thus failed to detect damaged homes, said the director in charge of Sinaproc, Abelardo Serrano.