(BBC) People attending a festival in Panama have been put on lockdown after the country declared a state of emergency over the coronavirus, organisers say. 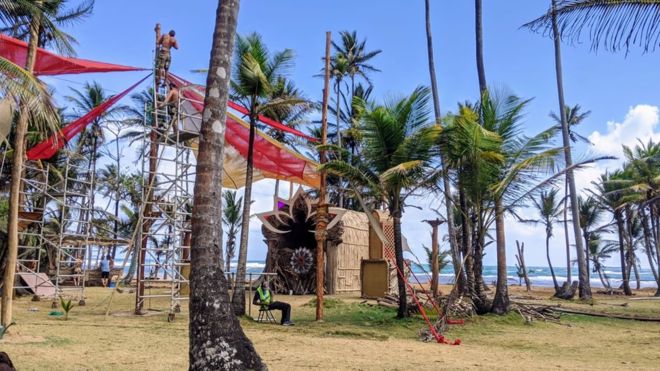 The Tribal Gathering festival said officials had taken the “extraordinary step” of ordering all guests at the site to remain there until 23 March.

One attendee said some 300 people were there.

The organisers said there were no confirmed or suspected cases of the virus among the guests.

Panama, which appears to be the hardest-hit country in Central America, has confirmed 69 cases and one death. It has closed its borders to foreigners and non-residents, and ordered non-essential shops to close, amid other restrictions.

The Tribal Gathering festival took place between 29 February and 15 March on a remote beach on the country’s north coast. Its events included presentations from indigenous groups and electronic and psytrance music.

Katie Hughes, who played and worked at the festival, said the event was allowed to continue until its last day on Sunday, when the government was expected to provide transport to take all attendees to the capital, Panama City.

But she said things had changed after there was a suspected case of coronavirus among the guests, and everybody was forced to stay on site until the result of a test on Monday, which came back negative.

On Monday afternoon, she said she and others had boarded a bus after being tested but the evacuation was interrupted again amid rumours that the government had imposed a lockdown on the festival and that nobody would be allowed to leave.

“It’s been a complete nightmare,” Ms Hughes, who lives in Manchester, told the BBC from Panama City. “We weren’t really given any information, no authorities or bosses from the festival came to give us any information.”

After two hours on the bus, they were told to go back to the festival’s site.

“Luckily,” she said, “one of the drivers said he would be able to get back to Panama City and drove us and 10 others who refused to go back.”

Ms Hughes estimated some 300 people had been unable to leave, including citizens from the UK, the US, Germany and France. The nearest town to the festival site, Sabanitas, is some two hours away, according to the event’s website.

“We don’t really know what’s happening in the festival now, some of our friends are still there but there’s no phone signal and very limited WiFi,” Ms Hughes said. “We don’t know what’s going to happen about them getting food or water as the festival is obviously all closed down, no music, nothing.”