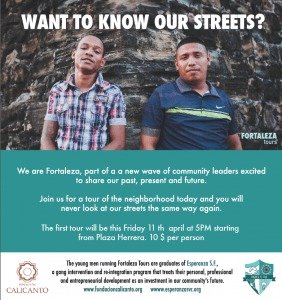 (Style.com) The coolest city tour in Panama is run by gang members. Welcome to the Esperanza Social Venture Club.

KC Harding is a cool guy, an American who came to Panama for the waves, and then ended up moving here—and marrying a pretty Panamanian. Together, they started buying run-down properties in the old area of Panama, our beloved Casco Viejo. KC eventually saw his dream for the city become a reality when things started to shift in Casco Viejo. He became an Aspen Institute Fellow, and then he really saw the light. Together with an amazing woman, Hildegard Vasquez (also an Aspen Fellow, as well as the architect of the Ace Hotel of Panama, the American Trade Hotel), he formed Fundacion Calicanto, an organization to help the women and children of Casco.

But there was a big elephant in the room that nobody was mentioning: the gangs that were a big problem in Casco Viejo and the nearby barrios. A lot of the members were just bored kids looking for love and something to do, so KC gave them both. Enter the Esperanza Social Venture Club. Esperanza means “hope,” and that’s the magic word here.

These kids decided to create a tour. Every Saturday at 5:00, you can go and meet at the American Trade Hotel and take one of the most jaw-dropping tours you will ever take. They will show you their stomping grounds, their hideouts, where they had their first kiss, or where mom met dad; really cool stuff. It all ends with a street party during which they cook for you. This whole project not only gives them purpose and the hope to give up the gangs altogether but it also gives people the chance to witness this firsthand, not in a documentary but with their own eyes. So if you wanna come hang out in Casco Viejo, add this dimension to it and get ready to be blown away!