Retirement can be costly. With the average life expectancy rising, and the costs of healthcare, insurance, and other expenses in flux — those working hard in their careers may feel like there’s little chance they’ll be able to retire and live comfortably after they leave their final jobs.

However, U.S. retirees are increasingly looking outside of their homeland for retirement locations that provide a lower cost of living, tax advantages, and maybe even a little adventure for their non-working years. Here’s why Panama could be a top choice for that.

Why you should consider retiring to Panama

The Panamanian government wants retirees to move there and has created policies that welcome them with open arms. For one thing, getting a Panamanian visa is very easy. The Pensionado Visa program allows retirees with $1,000 or more of lifetime monthly pension payments — such as Social Security checks — to get resident status. If you buy property in Panama, the monthly pension limit is even lower.

There are some other pleasant bonuses with this visa, like discounts on medical expenses, travel, food and entertainment, and even cheaper government services like electricity. Even if you don’t meet the $1,000 monthly pension threshold, there are other relatively easy ways to qualify for resident status. Regardless, retirees should plan to get a get a lawyer and an accountant to help with the legalities (more on this later).

Panama is relatively close and inexpensive to fly to, just a three-hour flight from Miami that usually costs only a few hundred dollars. Other great things about retiring in Panama are that the country is beautiful and warm, full of interesting culture and scenery, and also relatively inexpensive. Additionally, Panama uses the U.S. dollar as legal currency. 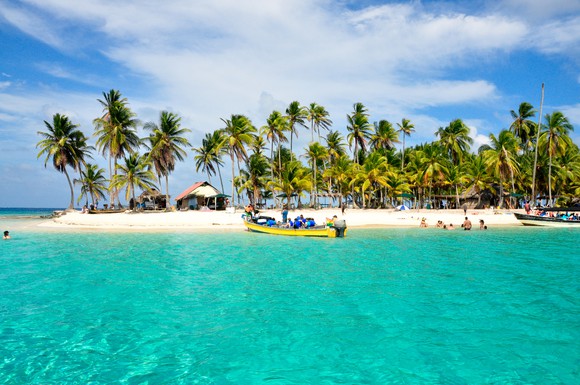 The truth is, people have many options when looking to retire abroad. International Living lists Mexico as its top pick for retiring abroad in 2017 based on its cost of living and large expat community. Other countries that usually round out those top lists are Costa Rica, Malaysia, and Malta, just to name a few.

What to know before you make the leap

Regardless of which country retirees choose, more and more seem to be retiring abroad. According to the U.S. Social Security Administration, 379,998 Social Security checks were sent to retired Americans living abroad in 2014 (the most recent data available), nearly 6,000 more than the year before, and up 50% from 10 years ago. However, before you decide to start packing, there are a few big considerations to know.

It’s important to know what to expect in terms of healthcare and security. Another draw of Panama as a retirement destination is that residents have access to quality healthcare, but in other countries, this may not be so. As for security, like any country in the world including the U.S., there will be cities or parts of cities that are less safe, and retirees abroad could be especially targeted.

Taxes can be another daunting part of a move like this. For most people, it’s worth it to hire a good accountant or firm that’s familiar with this kind of situation. The IRS will not easily let someone out of paying U.S. taxes, and there can be harsh penalties for not reporting foreign assets. “So long as you retain U.S. citizenship, you are going to owe U.S. taxes and need to make sure you are reporting accurately,” says Brittany Lanphier, managing partner at Lanphier LLP, a firm that deals with international tax and accounting services.

Lanphier stresses that clients can certainly make their international retirement work mostly headache-free, they just need to make sure they have someone on their side that understands all of the necessary legalities. She also recommends clients use a local account to ensure all local regulations are met. So long as the person follows these reporting procedures, taxes overseas shouldn’t be much more difficult than while living in the states.

There are certainly many other considerations, such as getting international insurance to make sure you and your belongings are covered while overseas. However, technology has made most of the daily chores of living abroad easy to handle — like finding the best way to communicate with friends and family back home, and how to get by with only basic local language skills. For those who are adventurous enough and like the idea of spending their retirement years in a lower-cost tropical country, it might be time to consider a move like this.