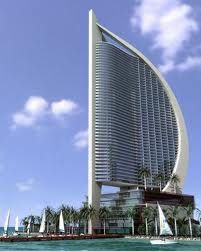 (Daily Mail) Donald Trump doesn’t do anything small, so it is no surprise that his first building in Latin America also becomes the region’s tallest.

The Trump Ocean Club reflects ‘the modern sensibility of the new generation of luxury travel’, the Trump Organization said in an invite to the resort’s opening.

The sail-shaped building is reminiscent of the Bahrain World Trade Center.

That’s perhaps a wise choice, because like parts of the Persian Gulf, Panama City has recently been styling itself as a hub for travel, tourism, international business and real estate.

It also has a roughly similar look to the planned Trump International Hotel and Tower Dubai.

That project was cancelled after the stalled economy, however.

According to AFP, the Trump Ocean Club boasts 47 suites, 37 elevators, a spa, marina, casino and an island with a private beach.

Lux: The Trump tower is home to luxury residences and a hotel, with rooms starting at $300 a night

Comfort: Residents of the tower can enjoy butler service, a massive terrace, a private island and beach and an oceanside pool

View: In this photo taken through glass, the Panama City skyline is reflected in a swimming pool at the Trump Ocean Club

The Donald himself: The tycoon attends the inauguration ceremony of his Panama building Wednesday

The private residences have reportedly already been snapped up by celebrities and the well-heeled, for prices from $250,000 to $1 million.

The rest of us may have the option of renting a hotel room in the glittering tower for a night, should we find ourselves in Panama.

Those who do live in the tower can take advantage of butler service, or stroll along a 9,690-square-foot (900-square-meter) terrace.

Or take a dip in the oceanfront pool.

According to AFP, the development required a Trump investment of $430million. It is said to employ about a thousand people.

Since he spent that kind of money in their country, Panama’s leaders officially forgave him for a recent gaffe.

Likely playing to the conservative base in the U.S., who have made the issue a kind of cause celebre in recent years, Donald Trump, 64, complained to CNN in March that the United States ‘stupidly’ turned over control of the Panama Canal ‘in exchange for nothing’.