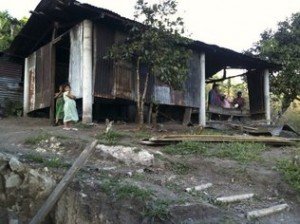 (SacBeee.com) Most of us can’t get the day started without a cup of coffee, and one local company has worked to satisfy that craving for three decades.

The Rogers Family Co. of Lincoln scours the world’s coffee-growing regions and works with farmers to source coffee cherry – the fruit that bears the coffee bean.

Pete Rogers has the task of purchasing raw coffee beans for the company, which will later be sent to Lincoln and roasted under a variety of brand names. And during the past 30 years, he’s seen the gourmet coffee business grow from a niche market into a market of mass appeal.

Rogers has also learned much about the people of these coffee-growing regions, and made it a priority to add philanthropy to his coffee-sourcing mission. In Rogers’ own words, here’s a description of the changes he’s seen in Panama. It’s one of the smaller regions for Rogers’ coffee-buying expeditions, but it still leaves a big impression on him:

“I first came into Panama in 1992. Back then, we had hooked up with a couple of large farmers. But walking around, I knew I wanted to help the small farmers. I saw that their farms were poorly maintained. The price the farmer was making was $1.80 for 30 pounds of cherry – about 8 to 9 cents per pound. That was incredibly low – terrible – but they had no alternative.

“When we first started coming here, coffee in Panama wasn’t well-known at all. I’ve been to a single farm in Brazil that produces more coffee than all of Panama.

“I remember going to Panama City, and a girl told me, ‘I don’t want to live on a coffee farm.’

“There was a lack of interest and lack of money. In Panama, I noticed they were missing almost a generation and a half of workers. You had people in their 60s still loyal to farming and some in their 20s were loyal and nobody in between.

“The biggest impression that burns in my memory of going to those small farms was seeing a 12-year-old girl that was pregnant. There was no way this girl should be pregnant. I went back the next year and she was pregnant again.

“The floor of their houses were dirt. They cooked inside of their houses and slept two or three feet away from the kitchens, and smoke was always there. The kids always had lung infections and colds, and they were filthy and dirty. It rained a lot, and they were always walking around with no shoes. It was a very dark and unhealthy environment.

“The small farmers were second-class citizens. So that was the challenge: How do we get them respect and pay them what they deserve?

“Altitude is important for farming coffee. Shade is also important, and rainfall and a good dense environment. Between the tropics of Cancer and Capricorn is where coffee grows.

“The specialty coffee market was born as Folgers and Maxwell House, and the others declined in quality. It’s like the wine industry, which until the 1970s was in jugs and then became specialty wines that cost $40 to $50 a bottle. That’s also what happened to coffee. Like it or not, you have to give credit to Starbucks for giving new awareness to coffee.

“Around 1998, we started the Panama Coffee Association and started working with some small farmers. Our first challenge was building trust. That was built over time and doing what we said we were going to do. …

“The Ngobe Indians come into the coffee farm around October and leave around March. The problem with coffee is that it’s a crop that only comes five months a year. We’re trying to find other crops so they can live there all year long.

“A lot of kids would come to school, and all they’d have to eat was a glass of sugar water. We started out giving them a big cookie that was made of a protein source, like peanut butter, and a rice cake. We give them food, a good breakfast, and give out books and backpacks. We get them involved in the school system and hope they stay. …

“I brought my son Matthew when he was 7. We were rebuilding some housing and putting the cinder blocks up. It was pouring rain and we were just drenched. He kept looking up at me like, ‘Are we really going to keep doing this?’ And I said, ‘Yes, we have to continue and build.’

“After 15 minutes of pouring rain, he was sitting under a banana tree with the other Indian kids. I was amazed he could figure out a game with the other kids just using sticks and rocks.

“The workers have gone from dirt floors to tile floors and cooking with gas. They’re sleeping on beds, and they have bathrooms and showers. It’s definitely changed a lot. Back in 1992 farmers earned 9 cents per pound of cherry. This year, it’s 33 cents per pound.

“This year’s crop is looking very small, and it looks like it’s going to be that way around the world. Prices are starting to creep up, and consumers could see prices up to 60 percent higher.

“The next vision is to start a labor company in Panama. We want to start a co-op and teach them how to run a business. They would grow the coffee, bring it to the mill and then we would buy from them.

“Our No. 1 goal is to keep the small farmers in business. Our second goal is to increase the quality of the coffee. Lastly, we want to eliminate these chemicals that they’ve used on coffee farms, along with aiding social programs.

“It’s our long-term view to figure out a way for my children to buy coffee from their children.”

What: The Rogers Family Co. of Lincoln roasts coffee under a variety of labels including San Francisco Bay Coffee, the Organic Coffee Co., Audubon Coffee, Café Jerusalem and more.