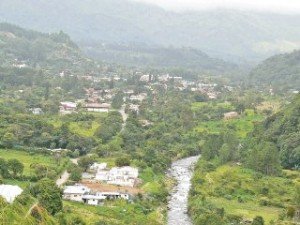 (Prensa.com) Today, with the most beautiful and flowery landscape, natural freshness accompanied by tasty daub, and its hospitable people emerged from a fusion of noble races, Boquete celebrates 100 years of foundation.

It was an April 11, 1911, Law 20, which legally created the district, and currently is composed of Bajo Boquete, Los Naranjos, Jaramillo, Alto Boquete, Caldera and Palmira.

Research by the writer and poet Boquete Rojer Mirna Ballesteros, in his book Boquete centennial historical poetic anthology, note that between 1880 and 1903 was registered a movement of peasants from the neighboring towns of Boquete, such as Caldera and Dolega, in search of better farmland.

The writer goes back to the text written by his grandfather, Esteban Ruiz, 50 years of Agricultural Boquete, which highlights the Colombian Juan Manuel Lambert, supported by the current authorities, took possession of all lands that could see up the Cordillera Central.

However, adventurers eager to get to the river valley Caldera, for its fertility and climate, penetrated into the “forbidden land” stolen by the Colombian Lambert. These early pioneers were Ledezma Quiros, Arce, Arrechea, Santamaria, Ruiz and Gonzalez, among others, who were arrested by authorities and later released under an oath not to get more “foreign lands.”

However, these early forays into the surrounding ravine, opening a path, near where is now known as Bajo Boquete. They managed to be respected by the authorities and avoid the large estates of Lambert, beginning to build the first houses.

Then there are two villages with a path way street, which would Bajo Boquete Alto Lino. The latter community became the first foreigner to Boquete. It was Henry John Watson, a native of Coventry, England.

Watson was the one who in 1904 built the hotel of Lino, the first site to host tourists began arriving in Boquete, attracted by its climate, the author notes in his book. Later, another immigrant family comes to settle in Boquete, Tedman.

Thus were born the first Catholic Church in Alto Lino in 1907, called the Sacred Heart of Jesus and in 1912, the parish of San Juan Bautista, the center of town.

The first street lighting was installed in 1915 and the Chiriqui Railroad reached the town in 1916.

Little by little they were creating public schools and was between 1949 and 1950 to build the David-Boquete road, which came to give impetus to the Chiriqui district.

To reward productivity and industriousness of their children, people implemented the Festival Café. Today, he is known as the Fair Coffee and Flowers.

One of those early settlers of Boquete serene walks through the modern streets of the district. He was heard to comment “before it was not so, there were few houses … I lived on that mountain and always went down to see the train when it came to people.” This is Alejandro Landeros, born in 1925.

Considers that Boquete has advanced rapidly, with banks, shops, restaurants, hotels and is on the world map as a tourist attraction.

Before, everything revolved around agriculture, the arrival of the train was quite a sight, because he had visitors or simply parcels he arrived.

Remember that in 1935 there came many Colombians, Central Americans and Europeans, attracted by the fertile lands and fresh climate. Landero considers the most beautiful place to live is Boquete, because nature in all its glory is the greatest gift of God to their children.

The town of Boquete is derived from a mixture of races, indigenous Doraces, an extinct indigenous ethnicity, rural Creoles and foreigners from all over the world.

The second wave of immigrants who came to this land was recorded 12 years ago, when Americans retired, Canadians and Europeans, attracted by the promotion of sale of land and homes at affordable prices, came to this district and bought lots, farms, homes and even established companies.

That raid led social service enterprises such as banks, parcels, medical, tourism, internet and others flocked to the area with bilingual staff to serve those users.

As a result, living standards rose, more expensive prices for food and other goods, and labor, skilled or not, also raised its cost.

However, the global economic crisis caused many of these foreigners were living in Boquete area and now you can see lots of signs advertising the sale of farms and residences.

Ruiz says that there is now a growing tourism of people who stay in the area for 15 days, which no longer generate foreign currency in hotels, restaurants and tourist guide services.

Do not forget that Boquete has been hit by natural disasters, such as Caldera River overflowed and other surrounding area, causing flooding and damage.

However, people are characterized by their drive and perseverance to cope with the damage and recover quickly from adversity, because he has learned to live with the ravages of nature.