(Insight Crime)Authorities in Panama’s northwestern province of Bocas del Toro have intercepted a string of vessels carrying large amounts of cocaine, a sign that traffickers are using the archipelago as part of long-range Caribbean Sea routes as pandemic border closures hamper overland movement. 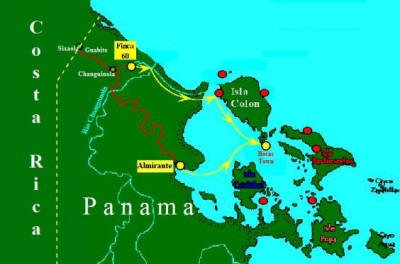 Panama’s National Aeronaval Service (Servicio Nacional Aeronaval – SENAN) seized almost three tons of cocaine in mid-September from a speedboat in the Bocas del Toro archipelago, which borders Costa Rica, according to a tweet by the agency.

The seizure was only the latest in a chain of busts. Between January and July 2020, 10.5 tons of cocaine were seized in waters off Bocas del Toro, a third of the nearly 35 tons registered nationally, according to figures from the Attorney General’s Office cited by news outlet Metro Libre. Speedboats were involved in more than half the seizures, La Estrella de Panamá reported.

More sophisticated trafficking methods have also been found. In February 2020, SENAN intercepted a submarine carrying five tons of cocaine in Bocas del Toro. It had been “close to 10 years since the Caribbean had seen or detected the presence of a semi-submersible,” a senior officer in the Colombian navy told the US military news site Diálogo.

Large-scale drug trafficking continues to plague Panama, with cocaine seizures having risen to a record of 78 tons in 2019. On September 16, US President Donald Trump included Panama in a memorandum identifying the world’s major illicit drug-producing and drug transit countries.

Panama drug prosecutor Javier Caraballo stressed that the increase in both the number and volume of Caribbean seizures marks a trend, one “that we are still studying to see how we can adapt quickly,” he told news agency EFE.

While maritime drug trafficking through the Pacific has long been a preferred route through Panama, border closings with Colombia and restrictions since the beginning of the coronavirus pandemic have seemingly forced traffickers to make heavier use of the Caribbean.

Though seizures are not a perfect proxy for measuring drug trafficking, several factors have likely led to the spike in speedboat intercepts off the coast of Bocas del Toro.

For one thing, maritime patrols have increased, according to Grisel Bethancourt, an independent journalist in Panama. Traffickers are also increasingly using the sea route “because it is easier to carry more tons of drugs because it comes directly from Colombia,” she told InSight Crime.

Panama has been described as the “mouth of the funnel” due to its shared border with Colombia, the world’s largest producer of cocaine. Bocas del Toro is ideally situated within that funnel. Its archipelago facilitates the hiding and smuggling of drug shipments, and its inaccessibility — road connections only arrived in the 1980s — complicates interdiction efforts. It also shares a porous border with Costa Rica that passes through a national park, in which there is a history of drug trafficking.

According to Bethancourt, it is highly unusual for drug boats to travel so far north in Caribbean waters off Panama’s coast. “Typically, traffickers favor launching boats from the Colombian city of Turbo, off the Gulf of Urabá, to the province of Colón in Panama,” she said.

The increase in cocaine seizures could be linked to the re-opening of certain drug routes by one of Colombia’s most powerful trafficking groups: the Urabeños, also known as the Gulf Clan (Clan del Golfo). Sources in northern Colombia reported to the Organized Crime and Corruption Project in May that several of these re-opened routes do indeed operate through Panama.

For Bethancourt, sources have told her that the Urabeños are likely behind the shipments. It is clear that these drug traffickers have experience, because “they are using the go-fast boats that have a lot of power in their motors and can carry drug payloads of three tons,” she added.

And finally, the increased trafficking in the Caribbean also reflects a wider pattern across Central America. Honduras has experienced a dramatic rise in cocaine seizures this year, predominantly in the province of Gracias a Dios, on the Caribbean coast. Likewise, Guatemala continues to struggle with the volumes of cocaine flowing through its Caribbean ports. As for Costa Rica, it has witnessed both its Caribbean coastal communities and biggest port turn into drug trafficking epicenters.