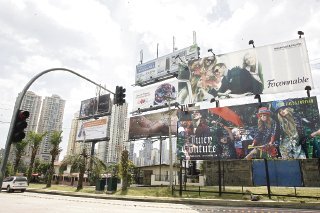 (Newsroom Panama) Panama’s streets will be less polluted as the month of April rolls along.

April 16  is the deadline imposed by the Ministry of Public Works for the removal of billboards  illegally standing. on public land.

After that date, the government will begin demolishing all remaining billboards, and imposing fines on the companies responsible for the visual pollutions.

In case the  polluters haven’t heard previous messages, Public Works Minister, Federico Suárez, said that the issue has been discussed enough,  and  the Supreme Court  has ruled on the issue.

On another issue of public concern Suárez said that, within two weeks, the entity is expected to have the final report on the causes of the collapse of the approach road to the Centennial Brid