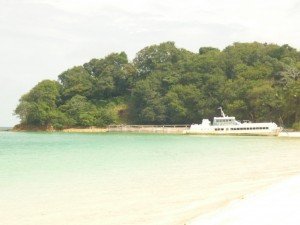 (Beacon Hill Times) “Blink and you’ll miss it,” I thought to myself, searching the open waters for a 14-foot dark object. Off the island of Contadora in the glistening Gulf of Panama, time was running out on my hour-long Humpback Whale tour.  Apparently I was looking in all the wrong directions, and was glad when my boat driver pointed to a tale splashing up before disappearing back into the deep blue. I was fortunate enough to be in Panama during whale watching season, where the majestic giants of the ocean come to breed and give birth. The Island of Contadora, where the Spanish once counted the bounty of pearls harvested from nearby islands in the archipelago, is now famous for its bounty of crystalline beaches. A mere 90 minutes by ferry, Isla Contadora is a blissful day or overnight trip from bustling Panama City.

To maintain a relaxed, island vibe once back in Panama City, I cruised around the oldest city on the west coast of the Americas—Casco Viejo. Dotted with colorful, Spanish style cafes, restaurants, and galleries, the historic city oozes atmosphere and historical significance. To take it all in and escape from the heavy heat, I paused at Café Unido for an artisanal cappuccino and observed the Panamanian street life through the long glass windows. It’s amazing how much you can learn about a culture by observing the people.

With the Panama Canal being the country’s main source of business, Panama is a country of services, and it’s seen in the kindness of strangers everywhere you go.  My tour guide, Carlos, was no different. Always stopping at fresh fruit stands to offer samples of indigenous treats and providing an impressive amount of facts, he is a true representative of Panama’s friendly demeanor.

On day five of my eight-day excursion, Carlos planned a waterfall hike and beach day on the Pacific side. After making it out of the horrendous Panama City traffic in his rugged Land Rover Defender, we were immediately swallowed by lush greenery that carried us into El Valle de Anton. The road dipped and lifted the jeep like an expert salsa dancer, and I was entranced by the sprawling mountain views. But even more captivating was the endless forest and biodiversity that surrounded me as I stood, hiking stick in hand, on a suspension bridge high above a picturesque creek. Forget the sound machine; I was living it, trekking through the serene sounds of trickling water, rustling trees, and tropical frogs. At the base of the Chorro El Macho Waterfall was a freshwater pool where I cleaned my hands and tried capope, a seasonal squash-like fruit. From there, we consulted a map and drove to Pipa’s Beach on the Pacific side.

Along the way, we stopped to visit The Nispero Zoo, which is more a grandiose open habitat for endemic animals than it is a zoo. The owner, an agronomist, utilized the seven-acre space as a garden, collecting animals and birds that people found and donated over time. Now, El Nispero houses over 50 different species of birds, an ocelot, a Tucan, spider monkeys, jaguars, crocodiles, tapirs, and more.  My word of wisdom is to beware of the ostriches—they peck at the feeble fence and their long necks can be quite scary when they’re lunging towards you. Back in the jeep, out of the ostrich’s range, the soothing sound of rain launched me into a pre-lunch spell.

When we arrived at Pipa’s Beach the smell of fresh fish and salt hit me like a spray of perfume in a department store. I immediately stripped myself of my sweaty hiking garb and changed into my bikini. The sand felt pillowy, like walking on a plush mattress, and the water was warm, inviting me in further each time a wave lapped around my ankles. The beach was decorated with seashells coated in ombre pinks and purples. I collected the ones that weren’t chipped and admired them further over lunch. Fresh fish, incredible ceviche and cassava root fries filled me up, and for the rest of the afternoon, I happily walked along the beach, letting the sun kiss my skin and lighten my hair.

The next day, the jeep hurled us through Soberenia National Park on the way to Colon. My head out the window, I kept my eyes peeled for monkeys. We stopped when we heard the cacophonous cries of the Howler Monkeys, a deep rumbling call not dissimilar to how I remember my dad sounding when he’s hungry. Upon pulling into Colon, the city’s unkempt colonial buildings seemed to cry out for attention. Colon was formerly home to lavish hotels, churches, and restaurants before political riots in the 1960’s consumed the municipal palace, leaving the city to corrode under a slew of military dictatorships.

Now, it’s in a complete state of renovation. The people don’t seem to mind, though, as they linger in alleyways and converse animatedly between outdoor fruit and vegetable stalls. Mentally preserving the view of the Caribbean Sea, I couldn’t believe that Panama is the only place in the world where you can cross from one ocean to another in only an hour. Even more unbelievable is that in such little time, you can watch a beautiful friendship between modernism and history form. But if you blink, you might miss it.