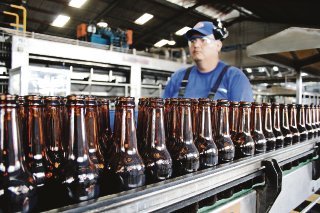 (prensa.com) Beer, one of the most consumed during these days of Carnival, is the alcoholic drink per liter increased domestic production, followed by rum and dry, according to figures from the Comptroller General of the Republic.

According to the report of the Comptroller, December was the month that recorded higher production with 24 million 218 thousand liters, despite the water crisis in the capital city paralyzed for three to five days, both as the National Beer Brewery Baru Panama, respectively.

Beer production has been accompanied by huge investments by the two brewers in the country.

National Beer invested only $ 5.3 million to increase its production capacity by 20% and to produce for the first time in Panama Miller Lite beer.

Juan Antonio Fabrega, Vice President of Corporate Affairs, National Breweries, said the company has invested over the past three years, a figure in excess of $ 40 million.

This investment is focused on expanding the plant, improving quality control and internal processes, design and manufacture of new packaging and boxes, a new fleet of delivery trucks, as well as improvements in refrigeration points sales.

Cerveceria Baru Panama has invested more than $ 15 million to double its production, due to increased demand.

In late 2009 the Cervecería Baru reached its peak production, which prevented him at that time to cover the demand, especially beer Panama, during the past two years increased by 200%, according to the company.

Cerveceria Baru is the producer of the local beers Panama, Sovereign Glass, and importer of the brands Heineken, Guinness, Paulaner, Budweiser and Tecate.

Meanwhile, National Brewery maintains a market leadership with 70.3% of the illustrious brands Atlas and Balboa, and now with the local production of Miller Lite, as well as import Corona and Miller Genuine Draft.