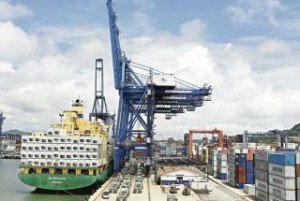 (Martes Finaciero) The dragon is the guardian of the treasures of Oriental culture. Custody are the riches of Gods and Earth.

Due to his energy and confidence achieved feats powerful, and when it reaches the prosperity, shared the wealth with their friends.

These features fit precisely to the so-called economic miracle countries of Asia, little giants renamed after the mythological animal, the Asian Dragons.

But in Central America they have a rival. Here the dragon is called Panama.

The country of the isthmus, only 3 million 400 thousand inhabitants, has decided to show the world why he is considered the highest power in the hemisphere in storage and distribution of goods, and why the actions of its logistics assets impact on three oceans and five continents.

This universal effect was demonstrated at the start of the logistics industry in the country, half a millennium ago and shortly after the discovery, with the passage of chests full of gold and silver moved from Peru to the Old Continent.

Since then began in Panama and the West Indies transport operations, storage, repackaging, land transport (mules) and redistribution of goods.

Years passed and the centuries, and appeared the gold rush in America. Throughout the hemisphere and wanted to get the virus went to get his strain in the states of San Francisco and California, where the yellow metal was abundant in the rivers and mines.

Reaching them demanded a test of life and death and several months of voyages from the east coast by mountains and valleys and golden deserts to western lands. It was then necessary to build a transit route less dangerous and more effective in mid-nineteenth century. And did the Panama Railroad.

A few decades later came the construction of the Canal and with them a jolt from the global maritime industry. Shipyards manufacturers came to realize that the waterway would allow the transit of vessels of other stall conditions and strengthen the warehousing and distribution of goods, and so built bigger models.

A century after the canal is enlarged to allow ships to cross even greater depth and capacity and be consistent with the needs of trade and multimodal transport.

This port and logistics industry forged over the years, as happened with the Rotterdam-considered the most important, now offers positive records of performance in logistics asset operations. With them is sustained why Panama is a service economy.

The port sector has moved 502 000 865 5 million containers, or an increase of 31% over the previous year. This figure will rise to 7 million just completed the expansion works of the waterway.

The railroad reached a record of movement of containers: 360 000, while in 2009 was 225 thousand. And Tocumen airport spent 5 million passengers.

Upon completion of the redevelopment of the airport, or in 2025, we expect the arrival of 14 million passengers.

Achieved better performance and frequent assembly and equipment between the Panama Canal, rail and port systems, the Tocumen airport and the Colon Free Zone, is forecast by the National Government the arrival of additional flows billion per year in gross domestic product and generating over 20 thousand new jobs.

The lack of connectivity reduces the effectiveness of operations.

The flaw is noted in the ports, they need complete cycles junction with the railway and roads, in national infrastructure, which should complete the access between logistics operators, and the integration of Tocumen Airport to the corridor that connected to the Colon Free Zone, says Rodolfo Sabonge, vice president of Marketing and Analysis Office of the Panama Canal Authority.

The interruption in the connection process creates bottlenecks that delay the delivery of the goods.

The logistics industry has been structured on the basis of uncoordinated individual efforts, but highly complex agents.

“This scenario has led to the availability of world-class logistics assets, but without the capacity to be exploited fully, limiting our competitiveness as a logistics hub,” acknowledged Deputy Minister of Foreign Trade, José Domingo Arias.

The sector is also limited by only partial knowledge of neighboring markets in Panama, namely the Caribbean, Central America and northern and eastern South America.

“There are 150 million people with other consumer expectations than those of our major trading partner, the United States” compares Albert White, president of the organizing committee of the Expo Logistics.

This is a population that the vast majority (70%) have an income between medium and low and usually only meet their basic daily needs. Hardly buy a plasma TV or a leg of ham.

The commercial demand of the residents require the creation of value-added logistics services, this is packaging, packaging, storage of inventory in optimal conditions, and changes in the final product in accordance with the requirements of the customer demand.

“Panama is an opportunity to reach all potential market of Latin America because we are a key strategic point of connection between producers and consumers, and vice versa,” explains Sandra Miró, spokeswoman for the air cargo carrier DHL.

Technical and vocational training is a void that raises concerns for all agents. Without it is impossible to achieve the aspiration to set the logistics in Panama in the same category as Singapore, Rotterdam and Zaragoza, the major competitors in Asia and Europe respectively.

Some experts describe as urgent the need to prepare thousands of Panamanians to fill seats that will come once work is completed the redevelopment of the Canal and the airport of Tocumen, the start of operations of the Pacific port of Panama, the creation of new construction zones and other airports.

Until now, a part of the transport and storage of cargo and other similar services were supported by the experience and induction, a trend opposite to that of the global village and its claim to structured business processes in models of scientific research.

“With them reach optimal effectiveness and safety of its own that require transport chains and distribution of goods,” says Esmeralda Hernandez, dean of the Faculty of Industrial Engineering at the Technological University of Panama.

Academic effort between Panama and Georgia Tech is a good start, but not enough for now. Technical training is important and appropriate knowledge of English by staff representing the workforce in all industrial segments.

The specialization and master are for a few leaders or aspiring to executive positions, but “most of the competitors requires staff to fill vacancies from the bulk of the distribution chain, like crane operators,” said Rodolfo Sabonge.

The void is experienced at present in the port of Balboa, which begins to suffer from lack of workers with expertise in the activity.

“Unfortunately not all agents of the Panamanian educational system have understood that we must make the changes necessary to develop new human capital that allows us to continue growing as a country,” argues Versari Luca, CEO of the Panama Ports Company.

In this sense a pressure build one of the goals of the Agency Pacific Panama (PPP) of creating 10 000 jobs by 2014, when he expects the completion of the works of the Panama Canal.

“We expect a large influx of skilled labor and trained that can be inserted in the different jobs that are being created in APP”, planned Olmedo Alfaro, general manager of the Panama Pacific Agency.

The dual master’s program in engineering and management of the supply chain of American Universities and Technology of Panama, in partnership with the University of Georgia Tech and Senacyt support may be the standard to follow if successful.

The academic project is similar to that made by MIT, Boston University, USA, and the city of Zaragoza, Spain, which led to synchronize the timing and movement of logistics assets in the European city at the height of world trade.

In Singapore, something similar has been happening since 1998 when the National University endorsed the analysis and development partnership with Georgia Tech academic and paid off to bring the country to the top of the logistics.

“This partnership enabled them to detect defects in the system, renovate and improve delivery times and provide security for the entire supply chain, cash variables translate into profitability and value for money,” said Hernandez, the representative of the UTP.

Approximate time of moving goods from the Colon Free Zone and the burden of Tocumen Airport is 90 minutes.

This record will improve with the construction of the new highway, and could strengthen the competitiveness of air cargo companies.

These measures would benefit multinational companies with regional distribution centers at the premises of the Colon Free Zone (CFZ).

Such is the case of DHL, which within hours to process international orders for release, with security being handled and transported in a single day.

Colon Free Zone has entered the dynamics of the solutions.

288 hectares of land donated to the Civil Aeronautics for the construction of a cargo airport worth $ 40 million, and seeks to eliminate the access and exit doors of the FTA, because they are too narrow for the flow of people, containers and cars enter it.

Sector development should be complemented by the global advertisement in Panama logistics activities are performed with less impact to the environment.

“Our trade route is considered the least consume CO2 (carbon dioxide) as happens in the air hub in Bogota and La Paz,” says Hernandez.

It is also appropriate to comment on the federal tax exemption granted to the load carried by the dry canal.

President Barack Obama said in his inaugural address in January 2009 that one of its goals the government was doubling of exports to Latin America, then the order of 640 billion dollars annually.

Only the dragon, the isthmus, had been preparing to be commensurate with the challenge, because four months earlier had begun work to expand the Panama Canal.

This dragon had awakened.

Logistics in figures and words

$ 150 – MILLION. Is the estimated value of investment in the Panama Pacific Special Zone. The contributions were made by the State and the developer London & Regional.

52 – gantry cranes. Panama is the Latin American country with the largest number of cranes over Brazil recorded a total of 33.

25 – YEARS OF LIFE. Ships today have a shelf life of service of a quarter century. With the redevelopment of the Canal, manufacturers had to change the dimensions and structures of ships.