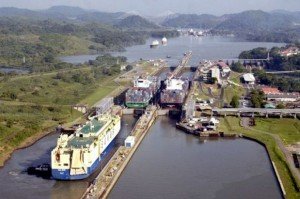 (Bloomberg) Shipments through the Panama Canal are on pace to climb to a record this year, surpassing levels set before the global economic slump, canal Chief Executive Officer Alberto Aleman said.

Traffic volume increased about 20 million metric tons from October through March from the same period a year earlier, a 13 percent gain, Aleman said. Shipments for fiscal year 2010 were 300 million metric tons, up from 298 million in 2009 and trailing the record 312 million in 2007, according to the Panama Canal Authority. In December, Aleman predicted 1.5 percent growth for 2011.

“We’ve seen in every segment of the canal very positive growth,” Aleman said today at an event in Washington. “Panama is becoming and will become the biggest logistics center of the Americas.”

The 50-mile (80-kilometer) canal connecting the Atlantic and Pacific oceans is spending $5.25 billion to expand, a project that began in 2007, adding locks on both sides of the canal and deepening the waterway.

The U.S., which completed building the canal more than 96 years ago, remains the biggest customer. Port authorities from Houston to New York are jostling for business from ships able to pass through a wider canal. The expansion may slash transportation costs as vessels as long as the Eiffel Tower carry Asian goods to ports in the U.S. South and East.

As much as 25 percent of shipping traffic may be diverted from Los Angeles and Long Beach, California, the busiest U.S. ports, once the canal can accommodate larger ships heading from Asia to Atlanta and Baltimore, Fitch Ratings said in February.