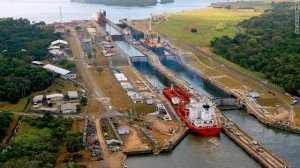 (Newsroom Panama) While much of the world shuffles toward economic recovery from the economic crisis, the Panama Canal is heading for a record year.

The news comes from the Canal’s administrator, German Alberto Zubieta just one week after the first concrete was poured for the widening of the Canal, predicted to produce a  major boost in revenues, when completed  in 2014.

Zubieta  is readying for a trip to Madrid . to participate in  an academic and scientific forum, on the implications of the expansion and to promote Panama as a regional logistics hub.

President Ricardo Martinelli will be in Spain on an official visit.
Zubierta told the Efe news agency that the  twin records of tonnage transits and tolls will be surpassed as the recovery of world trade continues. “In Canal tonnage, the projection will be exceeded possibly 15 to 20 million tons more than what we had budgeted ” said Zubieta.

Projections for the remainder of the fiscal year ending September 30 show  the total number of transits will be close to 320 million tons.  The previous high  was in 2007 with 312 million tonnes.”
He  predicted that fiscal year would  end with over $2 billion dollars in total revenues {jathumbnail off}

On Wednesday  Zubieta  will traveling on to Singapore on his logistics hub mission.