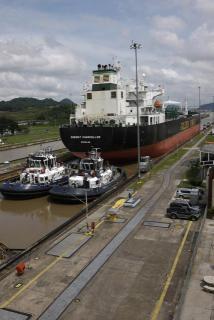 (Prensa.com) The Panama Canal-held tomorrow, Monday, 97 years of operations with a direct contribution total of more than 8000 $ 200 million, the most since December 31, 1999 to assume control of the Panamanians. “This anniversary is Canal on one of its most buoyant with an increase in full swing, which will empower the way in international transportation and development opportunities open to the Panamanians, “said Canal Administrator Alberto Zubieta German , in a statement. Since its transfer to Panama, the Canal has given contributions to the Treasury for around 6 000 to $ 400 million, according to the Panama Canal Authority (ACP). During the 85 years of management U.S. over the past 20 shared with Panama, the country received about $ 877 million billion U.S. from the exploitation of the road. “From the opening passage of steam Ancon August 15, 1914, the Panama Canal has provided a safe and efficient service to over one million transits mark reached in September 2010 over Plum Fortune bulk carrier, “says ACP. For its next fiscal year (October 2011 to September 2012), the Channel record the largest budget in its history with revenue forecast by 2 000 398 million dollars, including a projected 950 million in direct contributions to the state. As for the Canal expansion with a third set of modern and huge locks to double its capacity freight, has stated that an increase of 28%. Today the waterway is capable of carrying 300 million tons annually and to double its 5000 Panama is investing 250 million dollars in the works, due to end in August 2014, when it marks a century of operations. “The expansion of the waterway will double its capacity, which will impact on the economies of scale, positioning our country as the main logistics center of the continent,” said German Zubieta. Building Locks consortium is in charge of United for the Channel Group, led by Spanish firm Sacyr and composed by the Italian Impregilo, Belgium’s Jan De Nul and Panama’s Constructora Urbana.