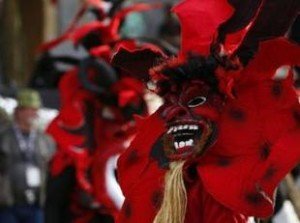 (Prensa.com) Since 2000 the rescuers of Colón traditions is dodone with the Festival of Diablos and Congos that in 2011 reached its seventh edition.

For the event’s executive producer, Robert King, the festival is a showcase of what normally happens in every town up the coast of Colon.

Idea of preserving the customs associated with the Congos, through the festival, stems from the concern of the people who saw their demonstrations were being lost, King highlights.

Congolese culture said, “is the result of ” syncretism “between components from different African origins and contributions of Spanish colonizers, restated in terms of survival needs and organization of slave resistance.

The traditions were synthesized in a ritual where the various characters involved dramatized themselves from the colonial era.

See the full interview in which King explains what this ritual, and describes the characters who participate in the activity.