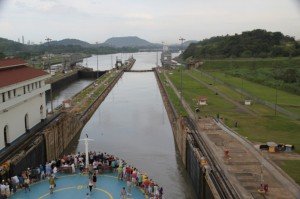 (Democrat Herald) Roughly two feet.  That’s how much clearance our ship had on each side when crossing through the Gatun Locks on the northern entrance of the Panama Canal.

It’s a once-in-a-lifetime experience — crossing the canal on a cruise ship — and I was lucky to do it in May. On a 15-day westward itinerary on Royal Caribbean’s Radiance of the Seas, we spent nearly an entire day passing through the 50-mile canal.

Each year, about 14,000 ships cross this man-made canal cut through the Panama isthmus. Creating a shortcut between the two oceans, the path trimmed 8,000 miles off a sea voyage that used to circle South America. Built nearly 100 years ago, the canal still works today using 19th century technology that harnesses the power of gravity. On the northern side of the canal at Gatun Locks, water travels through underground pipes from the Gatun Lake reservoir into lock chambers. The locks are needed to raise ships from sea level to the level of Gatun Lake, which is 85.3 feet.

Our day started early, with the ship entering Gatun Locks around 6 a.m. The canal is located about 550 miles north of the Equator. It’s hot. Even at that hour, the heat and humidity were oppressive. Some people couldn’t take it. As we entered the canal’s first chamber, a woman at the front of the ship fainted in the heat. As the day progressed, my portable thermometer read 95 degrees. Combined with the 84 percent humidity, that translated into almost-unbearable conditions for an Oregonian.

The day before, I’d spent about an hour at the Gatun Locks visitor center, watching several container ships pass through. I can attest that nothing compares with actually going through the canal on a large vessel.

And the Radiance is huge. Built with specifications to allow passage of the canal, the Radiance of the Seas is 105.6 feet wide. The locks are 110 feet wide, and canal officials don’t allow ships larger than 105.97 feet. With such a tight squeeze, we actually could reach over the balcony and touch land.

When we entered the locks at sea level, the ship’s deck 5 was even with ground level. Less than 10 minutes later, we were 30 feet up. (See the video link on the left to watch how quickly ships rise.) It took maybe an hour to pass through all three chambers at Gatun Locks, with the majority of the time spent carefully progressing the ship forward through the narrow gates.

After Gatun Locks, our ship went through Gatun Lake, a man-made lake that comprises most of the canal. As we passed tiny islands, we were reminded those were, in fact, the tops of mountains.

A few hours later, we entered the narrowest portion of the canal, Culebra Cut, which was cut directly through rock and mountainside. To this day, rock diggers constantly dredge to keep the route cleared. At several points along the cut, ships must wait for other vessels to pass because it’s too narrow for both.

As we neared the Pacific Ocean, we crossed two more locks, Pedro Miguel and Miraflores, which have three chambers between the two of them to bring the ship back to sea level. The entire canal crossing took about nine hours.

Now is an interesting time to visit the canal. Not only is the canal nearing 100 years of service, but Panama is in the process of a massive expansion that will add new cuts and bigger locks. The engineering firm CH2M Hill, which started in Corvallis and still has an office here, is involved in the project. With a projected completion date of 2015, the expansion could affect future itineraries, allowing even bigger cruise ships to pass through.

Wendy Kieffer is a copy editor at the Corvallis Gazette-Times.